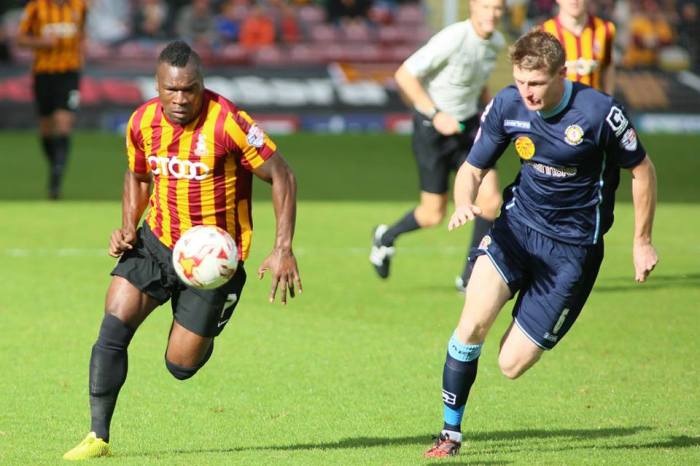 Well that feels better, doesn’t it? With time beginning to run out, Aaron Mclean’s decisive breakthrough could prove to be a big, big moment for the player and for Bradford City’s season. It finally broke the gallant resistance of League One’s worst defence, and succeeded in pouring cold water over the storm of negativity that was about to become the soundtrack to the coming week.

It didn’t look clever at all, as minute by minute ticked by and Crewe Alexandra’s goal remained unbreached. As frustration and tension was growing, patience and understanding was shrinking. The possession (61% vs 39%) and corner count (14 vs 1) told its own story of City’s superiority, and yet bottom-of-the-table Alex created the second half’s two clearest chances. The post match inquest was going to be brutal.

Then Mark Yeates found space to pick out a killer low cross into the area, and Mclean got a yard on his marker to slide the ball home. Just like in their previous two games, the eventual cracking open of Crewe’s defence was almost immediately followed by the concession of a second goal. Gary Liddle – City’s man of the match – struck a wonderful curling effort from the edge of the area. Wild celebrations greeted both goals; celebrations that were heavily laced with relief.

Crewe were spirited but utterly devoid of quality. Their only defence was to play all out defence. The bus was firmly parked in front of Ben Garratt’s goal, and its wheels were clamped down for good measure. You can’t blame them for such limited ambition, and indeed their beleaguered manager, Steve Davis, will ruefully reflect upon brilliant chances spurned by former Bantams’ loanee Chris Atkinson and George Cooper, at 0-0, that if taken could have delivered a very different outcome. Jordan Pickford made two huge saves for City, and was just as big a hero as the teammates in front of him.

Crewe’s approach enabled City to dominate the game from start to finish. Phil Parkinson’s decision to drop the midfield diamond in favour of a more conventional 4-4-2 is an interesting development; one that potentially signals an end to its use for home games. Without pace in wide areas, however, it remains to be seen if this more familiar approach can succeed against better opponents. Certainly, for large periods, the formation proved ineffective at breaking through Crewe’s backline.

Filipe Morais is the nearest thing that City have to a winger, but the former Stevenage man struggled to make an impact. Mark Yeates was a better fit on the left flank and continued his resurgence with a probing display. He linked up well with Alan Sheehan – a shock starter ahead of the in-form James Meredith – although the left back failed to make the most of the greater freedom to get forward. Still, at least Sheehan supported his man. Behind Morais, Stephen Darby’s form continues to regress.

And it was the pattern of the game for long periods. Some good passing play from City saw the ball worked into promising positions, either out wide or just outside the area; but a lack of tempo and penetration in the final third saw moves eventually break down. Sometimes it was due to the absence of a killer ball, on other occasions it was through attempting one too many passes. There is a potentially attractive Bantams’ team developing, but it still lacks vital components. For all the pressure, Crewe weren’t often stretched.

Andrew Davies – who made a welcome return in the centre of defence – saw an early header saved by Garratt. After good link-up play with Billy Clarke, Yeates stuck a shot on goal that was palmed away. Rory McArdle – who had a terrific game – should have buried a rebound effort after Clarke’s shot was parried. Jason Kennedy had a couple of long range efforts comfortably blocked.

There is a particular name missing from that list of first half chances – the man who leads the line. Mclean would ultimately be a goalscoring hero and worked hard, and he did have a first half attempt cleared off the line, but his overall performance was still some way short of what we might reasonably expect. Parkinson somehow has to find a way for Mclean to have a greater influence on his team’s attacking moves. The other nine outfield players need him to be more involved.

At least on this occasion, the manager was able to find inspiration from elsewhere. Billy Knott’s introduction on the hour changed a game that was beginning to drift away from the Bantams. After his poor display against Port Vale, Knott deserved to be dropped – but he responded in the best possible way here, providing the team with an instant spark and engineering some promising moves.

There is a joy to be had from watching good footballers like Knott, Yeates, Clarke and Liddle working effectively together, and this quartet were largely responsible for the continuing knocking on the Crewe door that was eventually pushed open. Finally, Yeates crossed to Mclean to score. It was soon followed by a good run from Morais and cut back to Liddle, via Mclean, for 2-0. There was no danger of a fragile Crewe side coming back from this double blow. Job done. Game won.

Ultimately, Parkinson can take great satisfaction from the way that his players kept going, especially as they had to deal with an increasingly agitated home crowd. He should be proud of a defence that is strong and which has solid back up options. A defence that – through a variety of combinations – has kept four clean sheets from 11 league games, shipping in just 11 goals along the way. Only three League One teams have conceded less.

Parkinson will be encouraged by the quality of the midfield players at his disposal: at times they produced some fantastic football. He will also be pleased by the league table that now shows City one place and one point outside the play offs, and only three points behind second-place Swindon. A top six push was barely expected pre-season, but it increasingly looks like a reasonable target.

Yet Parkinson will surely still worry about an attack that is too thin on effective options, and the fact that – in most games – City are failing to engineer enough shots on goal. James Hanson has scored nearly a third of the 15 league goals to date and was missed badly once again. He will be back to lead the line at Oakwell next weekend, but Parkinson needs to find a partner who will contribute more.

Mclean with his pay packet has to be that man, and a well-taken goal today is clearly a step in the right direction. Just as the knives were coming his way, a decisive goal enabled the striker to ultimately depart the field to warm applause.

It was that kind of afternoon, where the outrage and anger was about to be unleashed upon all and sundry. Instead, a lid has been placed upon supporter dissent, for the moment at least – and there’s every reason to believe that City’s season is back on track.