Home › Opinion › A letter from a Bradford City fan

A letter from a Bradford City fan 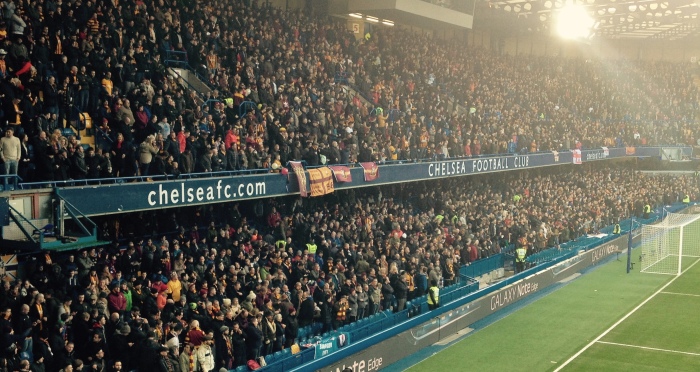 Re: Decision not to put Bradford City on TV

I feel angry and upset. The Magic of the Cup is an illusion after all. After a few days of borderline hysteria – the BBC, BT Sport and the FA have brought me and thousands of football fans back down to earth with an almighty bump. A system that ignores the actions of David and throws every advantage the way of Goliath is alive and well, and it stinks.

My evidence for this accusation follows.

Just a few days ago Bradford City pulled off what was described, in the words of the thousands of people who voted on the BBC’s own poll, the ‘biggest ever giant killing in the FA Cup’. Your own MOTD pundit, Robbie Fowler, called it the biggest FA Cup shock of all time. The public spoke, as did your own analysis team.

‘Brilliant Bradford’ the commentator watching the game for the BBC screamed, as a team costing £7,500 put the mighty Chelsea to the sword. For once, the description of the club was correct – it isn’t often you see brilliance at Bradford City but a few thousand people stick with the club through thick and thin. Honestly, people do support teams like the Bantams however your decision makes me think that you have forgotten that in favour of the need to continue satisfying the thirst of the mighty.

It was a courageous and gutsy performance – the kind a team like Bradford City need to beat a team like Chelsea. Surely it was a lucky one too? No, it wasn’t. The Bantams fully deserved their victory. Ask anyone who watched the game. Despite being 2-0 down, a team from League One stormed back to beat possibly the best team in England 4-2. ‘Unbelievable’ cried the pundits, commentators, media, politicians, fans, players and coaching staff. The fans of Bradford City pinched themselves, in shock at what had just happened. Tears fell down cheeks, grown men hugged each other.

Our reward for this has been miles and miles of positive press coverage. A so-called ‘small’ club who have survived administrations, countless struggles to stay alive, and battles to stay in the football league would surely get their just deserves and be rewarded with a day out on the TV. In this age of Premiership ubiquity where clubs such as Bradford struggle to cut through against the all-pervading Chelsea’s, Man Utd’s, Arsenal’s and Liverpool’s the ‘biggest FA cup shock of all time’ would surely be rewarded with the chance to shine in front of the nation?

No. Nothing of the sort. Collectively, the FA, BT Sport and the BBC have – to your eternal shame – thrown your full weight behind the Premiership clubs and given two-fingers to the so-called ‘magic of the cup’. If that magic exists within any of your organisations, I beg to suggest it is now screwed up in the bins outside the offices right now.

Liverpool will once more be on TV should they beat Bolton and meet Crystal Palace – an all Premiership tie if it happens. West Bromwich Albion’s home clash with West Ham will also be aired live, as will Aston Villa v Leicester. Both Premiership ties.

Manchester United have been presumed to overcome Cambridge at Old Trafford ahead of a trip to either Preston or Sheffield United. Manchester United on TV again. As predictable as night follows day.

Arsenal’s home tie with Middlesbrough will also be shown. Fair credit to Boro after what they achieved.

Many of these clubs receive millions of pounds in TV rights every year thanks to their elite position in the Premiership. This rewards them for their aptitude on and off the field. Reaching and remaining in the Premier League is no mean feat, so the rewards are more lucrative and that is well deserved. I don’t argue that point, although whether or not the division of financial rewards throughout the leagues is fair or not is an argument I won’t go into here.

That aside, the FA Cup – the so-called ‘magical’ competition – is the chance for the smaller clubs to thrust themselves into the publicity and cash frenzy that is football today. Once every season, the smaller clubs dream of the big ties, the big day out, the big upset, the day on TV, and the big reward that a cup run provides. The magic of the cup infects us, but today when I think of the word ‘infection’ in relation to the FA Cup, it’s something a bit grubby.

You have planted a huge ‘do not dream’ sign in front of one of the smaller clubs who dare to do so. A day in the limelight offers a club like Bradford the chance to demonstrate a local alternative to the all-shiny, brilliantly marketed Premier League clubs. The children who live in the area and claim an allegiance to a top four Premiership club they’ve almost no chance of seeing live, could well say to their parents ‘I want to go to Valley Parade’ on the back of a TV appearance and the publicity that goes with it. This rule doesn’t just apply to Bradford, it’s a problem faced by clubs up and down the country. The pull of the Premiership is a problem for many smaller clubs, one which you’ve disregarded today.

The prize for being televised in the next round of the FA Cup is about £250,000 – 0.05% of Man Utd’s revenues (£433.2m) and 0.2% of West Ham’s (£114.8m). For a club like Bradford, £250,000 isn’t a mere fraction of a percentage point. It’s a major impact on the balance sheet. It can make or break a season. It can make or break a club. So, when a chance comes, forgive me for thinking that a club who has just beaten Chelsea away from home should be given its chance to make some big impacts on its balance sheet.

I have nothing against their fortunes of the other teams who will be on television. They too have supporters who follow them passionately, and good luck to them. My complaint is that, having acknowledged the biggest FA Cup shock of all time, you have taken the magic of the cup that came with the Bradford victory, placed it on the penalty spot and smashed it into Row Z. Shame on you.

Like Loading...
‹ Chelsea is the best medicine
The Chelsea Verdict part two: Re-writing every single chapter of the history book ›