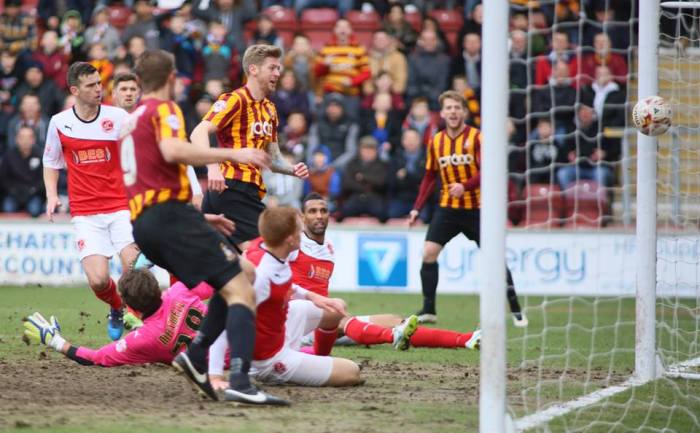 There has been so much positive about Bradford City’s season so far. But the missing ingredients are becoming increasingly evident; and these shortcomings are threatening to damage the ending.

However much a promotion push wasn’t expected last summer and even up until the autumn, it would now be a major disappointment if City were to stumble on the home straight in their fight for the play offs. If the final few games became a damp squib. If the close season was spent agonising over the mounting what-ifs.

This game was all about setting the tone for the final 10 matches. And with four minutes left on the clock, the prospect of defeating a play off rival offered a major confidence boost to take into the business end of the season. But then the Bantams conspired to chuck away a two-goal and two points, and the momentum has slipped further. Suddenly, the form guide reads one win in nine matches. Not the stuff upon which late promotion charges are made of.

‘What if’ indeed. This was maddening. City were complacent, City were careless, and at the final whistle City were crestfallen. 2-0 up and absolutely cruising. Fleetwood had long ago hoisted the white flag. They were out for the count, happy to see out time without incurring further damage. And home fans were starting to head home to beat the traffic, satisfied by their team’s endeavours.

There was nothing more to see here.

Suddenly a poorly conceded goal made it 2-1. Yet it still looked no more than a Fleetwood consolation. City would surely see it out. There was no real pressure that followed from the visitors. And though the gasps that followed the announcement there would be five minutes of injury time demonstrated that nerves within the stadium were growing, it still seemed a routine exercise in running down the clock. City were too superior.

But then a scramble, feeble attempts by home players to clear their lines and Nathan Pond was on hand to equalise for the Cod Army. Pond has been at Fleetwood for 12 years, during which he has made over 300 appearances and being part of six Fleetwood promotion-winning sides – a world record. From part-time footballer in the North West Counties League to a third tier player, Pond’s never-say-die attitude offered an interesting contrast to his opponents’ meek surrender. 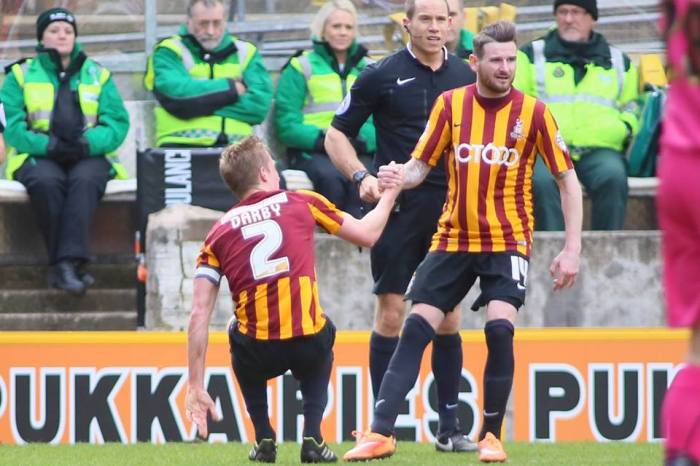 There were boos from a healthy 12,000+ Valley Parade crowd. The frustration magnified by the fact we have been here before this season, far too often. The conceding of stoppage time goals has already occurred against Gillingham, Scunthorpe United, Rochdale and Port Vale. Late equalisers were also conceded against Walsall and Notts County.

That’s now 13 points dropped from late winning positions. If City had retained even half of those points, they’d currently be sat in the play offs.

The arguments will rage over how this same painful Fleetwood ending occurred. The choice and timing of substitutions was blamed by some, and Phil Parkinson held his hands up after the game to admit he got them wrong. Yet he is entitled to have expected more from those who came onto the field late on and who let him down, and he is also entitled to demand 90-minute performances from those who stayed on the field.

It was a collectively failing; although you can see why substitutes Andy Halliday, Matt Dolan and Francois Zoko have more to hold their hands up for. Halliday’s stock amongst supporters has mysteriously dropped of late and perhaps he has not handled his recent demotion to the bench in the most productive manner. He was either fouled or easily bullied off the ball in build up for Fleetwood’s first goal; and throughout his cameo seemed caught in two minds between sitting alongside Gary Liddle or charging into the box.

But that was nothing on the other two, and Dolan was especially maddening. As I said, initially after Fleetwood’s first goal there seemed no danger of them completing a comeback, as City continued to dominate possession. They won a corner late on and Dolan and Zoko raced over to take it short and keep the ball near the corner flag. Inexplicably, Dolan swung a lazy-looking cross into the box where no one in claret and amber was based, and from there Fleetwood attacked and the pattern of the game changed in their favour.

What is going on here, Matty? You clearly have plenty of talent, otherwise you wouldn’t have reached this point in your career. But do you really want to be a professional footballer? Do you think the standards you showed today were acceptable? We know you can do so much better, and it is deeply frustrated to watch you play so casually and without thought. Your livelihood is on the line here. The drop to non-league football is not as far away as it seems. Just ask Pond.

As for Zoko, he wasted a big opportunity at 2-1 when he took the wrong option, and soon after produced brilliant bit of skill but failed to get a shot on goal. And then at 2-2, Zoko had a glorious, glorious chance to right his team’s wrongs and reclaim the three points. He screwed his shot badly wide.

He is not the player we need him to be. I get that Zoko tries – he does – but the bar is rising all the time at Valley Parade and he is falling short of it. 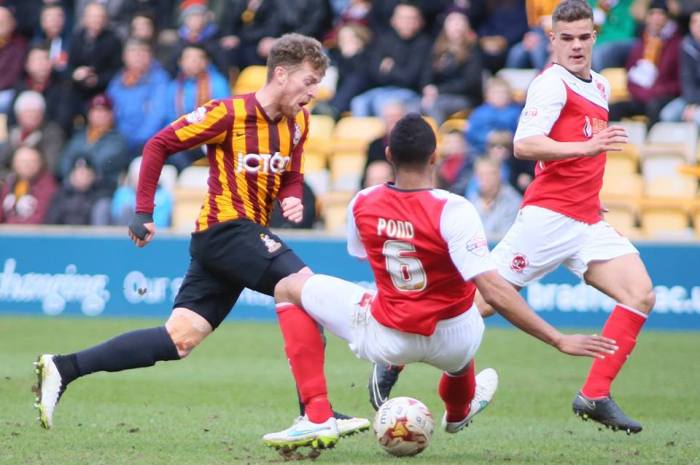 Had Zoko scored, the outlook would have been completely different and more fitting with what we actually saw on the field. Because make no mistake, for 86 minutes City were very good here. They outplayed a side who might not be easiest on the eye, but who are wily, talented and in the play off shake-up on merit.

The Bantams played some impressive football at times, and the story of the day was set to be that of the three midfielders in the diamond who had been overlooked for the Reading game last Monday – Billy Clarke, Mark Yeates and Christopher Routis.

Clarke was especially unfortunate to start on the bench at the Madjeski, and he underlined what a difference he might have made in the FA Cup replay with some outstanding pieces of football. I am a big fan of Clarke. I love his intelligence and craft on the ball, the fact he picks out passes that those of us in the crowd don’t spot, and the way he can glide past defenders with the ball seemingly tied to his boot.

Clarke personifies better than anyone the fruits of Parkinson’s summer revamp to the squad. Previous City managers would have scratched their heads on where to play someone like Clarke.They’d have given him a role where he couldn’t shine,and then found it easy to leave him on the sidelines. But Parkinson has got the best out of Clarke, and his link up play with those around him is a joy to behold. He is no leader, but he makes people around him play better.

It was from Clarke’s excellent charge into the box and low cross from where City took an early lead. Town’s goalkeeper Chris Maxwell mis-handled the ball, allowing Jon Stead to squeeze the rebound home. City were rampant in those early stages. Yeates enjoying his best performance in a long time. Routis and Clarke came close to doubling the lead. 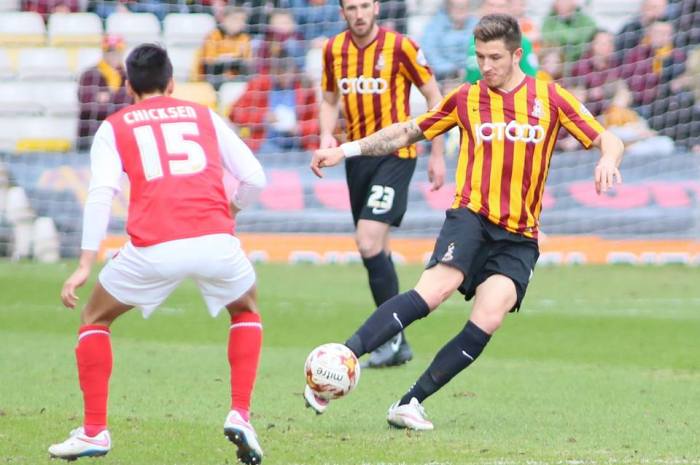 Routis has experienced a rollercoaster first season in English football, and has certainly come a long way since I first saw him on trial for a Bradford City XI at Ossett Town last July. His calmness on the ball and passing ability always suggested the Frenchman could have a big future, but his composed style has not always proven the right approach for a League One defender.

After his harrowing afternoon as centre back at Oldham last October, Routis has been held back and re-invented into a midfielder. Playing on the right of the diamond here, Routis was very impressive. Like Clarke he links up well with team mates and is mastering the late run into the box from the opposite side.

Routis almost got in a couple of occasions earlier, and then just after half time he timed his run to perfection and converted James Hanson’s cross at the back post. 2-0, and cruise control.

It wasn’t that City let up from that point on – they really didn’t – but perhaps beyond the obvious post-match criticisms about failing to see out games, a more long-term shortcoming was revealed. Because the truth was that City should have been out of sight before the closing stages. They lack a ruthless edge in front of goal.

I like Stead, and I like Hanson, but neither are prolific goalscorers. And the fact there isn’t a prolific goalscorer on the books – a Nahki Wells – is hurting City’s progress. Only seven League One teams have scored fewer goals than the Bantams – and only Fleetwood, above them in the table, rank below in the ‘Goals For’ column.

There is a clamour to sign up Stead in the summer and I am firmly with these people. But how many goals are Hanson and Stead likely to collectively score over a full season? Would they match the 41 of Hanson and Wells in 2012/13? And though the rest of this team are much better at chipping in with goals compared to the History Makers side, it is a concern. Sign Stead up, but next season we will also need a striker who can push on towards 20 goals.

That is for another day, and certainly there isn’t much that can be done in the short-term to address the relative lack of goals. What is needed quickly is greater steel and resolve, so that slender leads are held rather than surrendered. So that in sticky situations, leaders rise and stand tall. Pointing the way for others to follow.

And therein lies the positives and shortcomings of Bradford City this season. We have improved significantly in the style of football played and the quality of the attacking players on show. Remember Parkinson’s first season and his insistence on playing two holding players in the centre of the park? Now we have the joys of Clarke and Billy Knott and Filipe Morais and Routis and Yeates conjuring up magical displays behind an intelligent front two pairing – and anchored by the steady hand of Gary Liddle.

But we don’t have the courage of Gary Jones and Nathan Doyle. The resoluteness of Garry Thompson and Will Atkinson. The doggedness of Ricky Ravenhill and Zavon Hines.

If Parkinson can readdress this balance some more, and ensure that City can mix the ugly side of things with the pretty, they can still mount a play off push this season. There are some huge games to come between now and the final outing at Crewe and the recent cup exploits can be an inspiration for handling these occasions.

But the team are going to have to demonstrate far greater character and resolve when things start going against them, in order to succeed in their bid to extend their season.

With special thanks to the brilliant Thomas Gadd for allowing us to use his brilliant photos. Please visit Thomas Gadd’s website for more details or here to view more photos of this game.