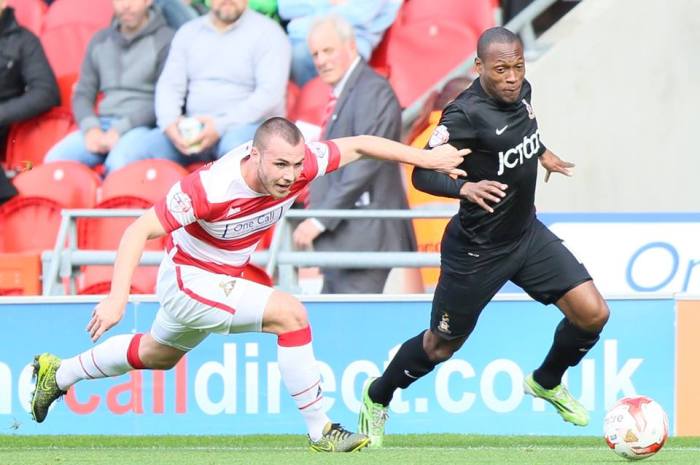 An England international centre half who made his name at Derby County, playing under Brian Clough and winning the First Division title twice, Roy McFarland arrived at Valley Parade in 1981 to begin his managerial career. He was a player manager for Bradford City, guiding them to promotion from the Fourth Division.

McFarland played 40 times for the Bantams during an era when player-managers were in vogue. He had only just turned 33 and retained the class that had enabled him to play at the top for so long. Sadly his time was tainted by a controversial departure back to Derby County, with allegations he was tapped up eventually leading to the Rams having to pay a large fine and compensation.

Although before my time, I feel like I knew about John Reid as my late Father spoke about him and George Mulholland often as his favourite City players of that era.

Lanarkshire born Reid arrived from Hamilton Accies for a not unsubstantial £2,500 fee in December 1957. And for the next four years, the Scottish playmaker was a darling of the Valley Parade crowd with his intelligent probing, passing and a very decent goal record. He was also picked for the Divisional selection alongside his team mate and winger Martin Bakes in 1958.

He moved on to Northampton in 1961, City doubling their money on him. After his career ended he moved back to the city. He became a popular member of the Ex-Players Association and a regular visitor to Valley Parade.

Phil Parkinson’s first signing was a good one. Kyel Reid was, as all lower league wingers are, inconsistent, but could produce moments of brilliance.

Reid was important in securing survival in 2011/12, and after an injury-hit following season he was outstanding in the play off final triumph. His personal peak came in the first half of 2013/14 – he was our main creative outlet and and scored the goal of the season against Walsall.

Serious injury stopped Reid, but his return on loan in 2015 – particularly his first game back against Rochdale – sparked City’s season into life and drove us towards the play offs.

After standing for over 40 years, George Robinson’s individual club appearances record was broken four times in the next decade. Firstly by Bruce Stowell, followed by John Hall then again by Ian Cooper and finally Ces Podd.

Bradford-born Cooper, predominantly a left back, arrived in 1962 as an amateur before signing professional terms in 1965. Finally cementing his place in 1967 he was incredibly consistent – including a patch of 154 consecutive matches and not missing a single match in four separate seasons, a record jointly held with Charlie Bicknell, George Mulholland and Geoff Smith.

A quick full back and good tackler, with good recovery skills, Cooper was a member of the promotion side of 1968/69 as part of a 15 year career at Valley Parade. A bona-fide City legend.

A Liverpudlian who struggled to make the grade at Everton, Eddie Youds signed for Bradford City in the mid-90s after falling out of favour at Premier League Ipswich Town. He is best remembered for captaining the Bantams to promotion via the club’s first-ever visit to Wembley stadium, when they won the play off final in 1996.

Youds was a classy centre half who unfortunately suffered a number of bad injuries during his three years at City. This included missing the entire 1996/97 campaign. But when he was fit, Youds was a genuine force. A good reader of the game and very good on the ball. Youds was eventually sold to Charlton on transfer deadline day in March 1998 to balance the books. But his association with the beginnings of the Richmond years means he is remembered with affection.

A tough tackling midfielder who also had a wonderful range of passing skills, Mick Kennedy was brought in to add bite during the ‘nearly’ season of 1987/88. It was the year when City almost reached the top division after an absence of over 60 years, playing some wonderful football before falling just short to Middlesbrough in the play offs. A little bit more investment in a tired injury hit squad might have just seen them over the line.

Kennedy was well known in West Yorkshire after spells at Halifax and Huddersfield. And apart from a lengthy period at Portsmouth after City, he rarely stayed anywhere too long. Despite being Manchester born, he gained international honours for the Republic of Ireland. Only at City for just over a season, his tough style certainly left its mark with all his clubs. He sadly passed away aged only 57 in February 2019.

Going to Valley Parade during dark days of League Two was not often fun, but Omar Daley was the player who most often made it worthwhile.

He was inconsistent and lacked end product more often than not, but could produce the most amazing moments. His flying volley against Bury remains the best goal I’ve seen from a Bradford City player.

Daley’s departure on loan removed the final bit of joy from that Peter Taylor team, but he returned for one more key moment – a screamer against Aldershot to help us secure survival.

Lee Duxbury grew up in the same village as me (Sutton-In-Craven). I went to the same secondary school, at a time when Lee was at the height of his powers playing for Bradford City – he was the former student-made-good who everyone playing football could look up to.

Duxbury rose through the Bradford City youth ranks and found opportunities after the nearly season side of 88 was broken up. Although suffering relegation to the third tier, Duxbury was one of the few players who did himself justice. Fans loved his never-say-die approach of covering every blade of grass. He gave everything, and his excellent passing ability made him the heartbeat of the side.

After a spell at Huddersfield, Duxbury returned to City to play a key role in the famous 1995/96 side that achieved promotion at Wembley, before being controversially sold to Oldham a year later. He was always someone who could be relied on to stand up for the cause, and drive standards in others. And that’s why he remains a celebrated hero of the past.

Bobby Ham hailed from a family steeped in Bradford sporting folklore – his father being a top amateur and his brother Alan also on City’s books. Also well known for his involvement with Baildon RU & Bradford & Halifax Speedway, the diminutive striker started off over at Horton with Bradford Park Avenue as part of a deadly partnership with Kevin Hector.

Ham crossed the city in 1968, just in time to win promotion with the Bantams in 1968/69. He was a typical penalty box goal poacher, playing best off a target man. A regular goal-getter, he achieved a four-goal haul against York in 1970 and a hat-trick against Bournemouth in a 8-1 trouncing in 1971.

In two spells with City he hit over 60 goals – which, along with his Avenue haul, made him the highest scoring league player that was Bradford-born. A highly popular player for his efforts across the city divide.

When in the summer of 2000 it was announced Premier League newboys Bradford City had signed Sheffield Wednesday’s third choice goalkeeper, few Bantams fans were excited. Yet less than a year later, Matt Clarke was excelling at Valley Parade and talked up as a contender for the England squad.

He had to bide his time initially behind the superb Gary Walsh. But after injury to City’s number one, Clarke was given a City debut at Anfield of all places, impressing by producing a string of brilliant saves. He very quickly established himself as first choice.

With City struggling at the wrong end of the table, Clarke was always going to be a busy keeper and he made himself a hero amongst fans for a series of outstanding displays. City didn’t lose a home game with Clarke in goal for four months, as he helped the Bantams beat the likes of Arsenal and Newcastle. Eventually, City survived relegation with Clarke a star.

Sadly, in City’s second Premier League season, Clarke lost his focus and form fell away. Talk of interest from the likes of Arsenal went to his head, and when he was dropped from the City team he slapped in a transfer request which did little to appease new manager Jim Jefferies. Eventually he left for Crystal Palace, before his career was cut prematurely short through injury.

Despite the acrimonious ending, Clarke is considered one of the best goalkeepers to have ever played for the Bantams.