The 100 Most Popular Bradford City Players Of All Time: 10-6

True leadership is not just about achievements, but showing resilience during difficult times. And that was what Bradford City were blessed with from David Wetherall between 1999 and 2008.

For nearly a decade, the central defender was a calming presence that held together the Bantams defence. He was a vital linchpin during a period of turbulence and uncertainty for the club. Helping to put the brakes on the speed of City’s post Premier League decline.

He arrived as a £1.4 million club record buy in the summer of 1999, ahead of City’s first top flight campaign in 77 years. He proved excellent value in his first season alone, being the only outfield Premier League player who was ever-present for their club over 1999/00. As the Bantams fought considerable odds and successfully avoided relegation, Wetherall was outstanding at the back alongside Andrew O’Brien. Most famously of all, he headed the crucial final day goal against Liverpool that kept City in the Premier League.

The subsequent decline – caused by reckless financial gambles that saw the wrong types of players recruited – could not be blamed on Wetherall. As City hit financial crisis back in the Football League, Wetherall might easily have been one of the crown jewels sold off. But a period of reoccurring injury problems saw transfers fall through. In the end, a lengthy lay off for Wetherall proved fruitful for the club in the long-term.

Because once City finally got through two spells in administration and into austerity times of League One, a fit again Wetherall was superb. As captain he led by example, inspiring strong performances from the defence around him.

City might have done little but tread water in League One, but thanks to Wetherall and Dean Windass, the club’s decline was at least halted for a time. Indeed, relegation to League Two only occurred after Wetherall was asked to be caretaker player manager, and found the dual responsibilities too much. Wetherall the manager was robbed on a fully firing Wetherall the player, and City went down.

Of course, the club’s fall down the leagues was of some benefit to Wetherall. As age crept up on him, dropping down the levels meant he was still able to impress. Indeed it was only in City’s first season back in League Two, 2007/08,  that he began to struggle as a player. It lead to him quickly taking the decision to retire. It took four years before he was adequately replaced.

Wetherall was a fiercely committed player who never gave anything short of 100%. He was such an intelligent defender, comfortable against a range of opposition playing styles. He was methodical, calming those around him. In the end he made more than 300 appearances for the Bantams, and he always represented the club with great dignity.

The 2000s was a decade of huge player turnover at Valley Parade – so many signings were disappointing and soon moved on – that made the ongoing retention of Wetherall so vital. He was ingrained in the fabric of the club, at a time when everything around him seemed so broken.

You were always proud to say David Wetherall played for Bradford City. And you’d do incredibly well to find anyone who had a bad word to say about him.

How we could have done with a player like Jamie Lawrence last season. Heart on his sleeve. Muscle. Power. No nonsense. And a good player too!

Lawrence made 155 appearances for City, playing a key role in two of our best ever seasons; promotion to and survival in the Premiership.

Lawrence may be fondly remembered by some for his hair styles and famous back story, ‘From Prison to the Premiership’ (a good read!) But he also was a excellent footballer; skilful, quick and powerful. Lawrence has attended a number of events and games at City over the years, and many would love to see him back at the club in some form again.

Dean Windass’ healthy goalscoring record of over 80 goals in approximately 250 appearances for City puts him at number four in City’s all time goalscoring heroes. Signed by Paul Jewell in 1999, Windass would help The Bantams to secure promotion to the Premiership. Not bad considering a few years prior to this he was working on a building site in Hull.

Windass could play either striker or in midfield and had a reputation for no nonsense, no frills football. Windass also had a ‘passionate’ streak which saw him involved in altercations both on and off the pitch with players and officials alike. His perhaps most infamous tackle against Sheffield United in the last minute of a September 2003 defeat demonstrated this ‘passion’.

However infuriating Windass may have been sometimes, you could not question his dedication and sense of humour that made him not just a prolific goalscorer but also a City legend. A personal highlight of mine would be the alleged miss-timed shot against Liverpool which almost knocked out the now retired referee Jeff Winter. Luckily, Winter judged it to be a miss-hit and no further action was taken.

When Geoffrey Richmond’s risky riches appeared (and faded as quickly as ITV Digital) during City’s second season in the Premiership, Windass would play alongside Ashely ‘hold it up’ Ward and the ever classy Benito Carbone – but financial restraints on the club meant that he was sold to Middlesbrough.

Windass did re-sign for City in 2003 where he would become a stalwart in the side and have his most prolific goal scoring spell at the club, most notably his hat-trick against Scunthorpe in 2006 after his five game ban.

It was a sad day when in January 2007 Windass would be loaned out to and eventually sold to Hull in order to help ease the wage bill. His goal scoring record in the league was phenomenal and is testament to a player who clearly loved the game, whoever he played for. And whilst he is considered a legend in Hull, he’ll always hold a special place within the Bantams family hearts, as we do in his.

Stuart McCall once said of Robbie Blake, “If you’d have put together a DVD of Blakey’s greatest moments, then you could have sold him to Real Madrid.”

The other member of the dream strike force of 98/99, Blake had actually arrived at City as a Chris Kamara signing from Darlington in 1997. It took him a while to settle in and it wasn’t until Paul Jewell partnered him with Lee Mills as an alternative to record signing Isaiah Rankin that we were able to fully appreciate what an absolute baller we had on our hands.

So many times that season Blake would twist and turn, bamboozling defenders and leaving them on their backsides. He scored some fantastic goals and put in some incredible individual performances – most notably home and away against Sheffield United where he was simply unplayable.

It wasn’t just McCall who could see how talented Blake was. Many supporters argued that if he’d have been half a yard quicker then he could have gone to the very top. Sadly that wasn’t to be with City, as Burnley took advantage of our dire financial straights in 2002 and signed him for a paltry £1m.

Blakey never quite got his move to the Bernabau, but he had a long and successful career in the top two divisions – including two spells at The Clarets where he became one of their club legends too. 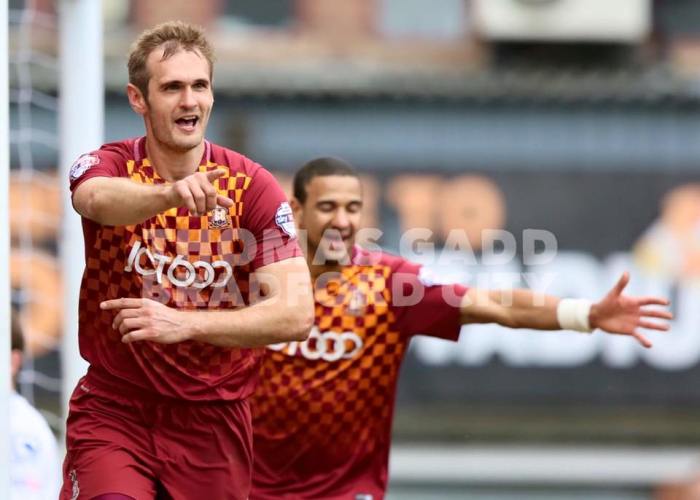 James Hanson lived the fairytale. A Bradford lad rejected by his hometown club as a kid, playing non-league and stacking shelves at the Co-Op – we all know the story. He took a pay cut to join Stuart McCall’s cut-price side in 2009, where raw his aerial presence caused problems and he picked up some useful goals.

He looked like stalling for a bit afterwards, but the arrival of Phil Parkinson and the start of his superb partnership with Nahki Wells turned him into a key player and the focal point of the attack. The 2012/13 season then turned him into a history maker, with Hanson scoring the first and last goals of that cup run.

His header at Villa Park wrote him into Bradford City folklore forever, but Hanson wasn’t done yet. He scored some vital goals in the play off run-in, then combined superbly with Wells in the semi-final against Burton and scored the opener in the final.

He coped well with the step up to League One and his partnership with Wells went from strength to strength, but it was after Wells left that he reached his peak. With Aaron McLean struggling it was Hanson scoring the key goals that kept City afloat in mid table, and he started the following season superbly. And yet again he scored a goal that City fans will remember forever – the winner against Leeds.

His contribution to the FA Cup run of that season is mostly forgotten compared to Jon Stead, but it was Hanson who made the key contribution in round three, and he gave young Chelsea defender Andreas Christensen a lesson in aerial play at Stamford Bridge. Even as injuries caused his performances to decline slightly and his appearances to become less frequent, he still popped up with memorable moments – his first hat trick against Walsall and an emotional winner against Northampton in the first game following Bobby Campbell’s death.

We all know his story, but it’s such a good one for football romantics that it bears repeating again and again. The kid who was rejected, plucked from obscurity, taking his club to Wembley and ending up as City’s third highest scorer of all time.

But it’s not just the statistics that we remember him for – it’s the moments. For all of the big moments of the Phil Parkinson era, you would see James Hanson making a key contribution, and that, more than anything else, is his legacy.