Home › Opinion › Bradford City fans and the sense of entitlement

Bradford City fans and the sense of entitlement 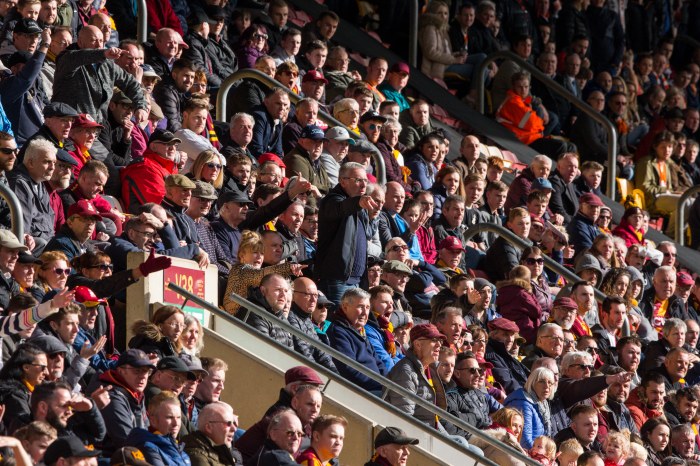 A couple of years ago, Newcastle United were on the verge of getting promoted back to the Premier League. All they had to do was beat Preston North End at home, in a game that was screened live on Sky Sports.

I remember tuning in, expecting to watch scenes of ecstatic jubilation from a club legendary for their passion and lack of success. Yet instead, promotion celebrations were low key. At full time and after a 4-1 win, the players had a mini walk around the pitch clapping fans before heading to the dressing room. And the fans quickly filed out of St. James Park, content with victory but not exactly overwhelmed with emotion.

It felt really strange then, but as time has gone on I’ve come to realise and appreciate just why Newcastle’s promotion back to the Premier League was not a reason for hedonistic scenes. Newcastle had only been relegated the season before under the weight of poor ownership, under-performing players and too many changes of manager. This was a club with a recent history of pushing hard at the top of the Premier League. And expectations were still to be amongst the top teams in the country. Winning promotion from the Championship was nice, but it was still a long way below the club’s potential. And that it made it difficult for fans to feel overly excited.

The story of Newcastle’s modest promotion celebrations has relevance with Bradford City this season. As we reach the cusp of December, the Bantams are well-placed to make an instant return to League One. 30 points from 17 games is an excellent return that – if maintained – will probably be enough to finish in the top three. And that will mean a promotion party in West Yorkshire.

Yet just like Newcastle in 2017, you suspect it wouldn’t be the wildest of celebrations. A moment to savour, naturally, as this club is not exactly blessed with a track record of regular promotions. But the sense of achievement will be tempered by the high expectations that we supporters have for Bradford City. Promotion is not far off a minimum requirement this season. And it would be a long way short of fulfilling what we believe is the club’s true capabilities.

There’s a sense of entitlement amongst Bradford City supporters this season. That sounds like it should be a bad thing, but it’s just reality of any club that has fallen swiftly through mis-management – and where the bar is much higher than the present day surroundings. It’s also quite normal in football. Most clubs who are relegated begin the following season in the lower division with a sense of entitlement that they shouldn’t be stopping around in their more modest surroundings for long.

For City, a promotion would be a step towards recovery – albeit an incredibly important one. At roughly the same time as Newcastle achieved that promotion in 2017, the Bantams were about to better Fleetwood Town in the League One play offs. Stuart McCall would lead City out at Wembley, where but for some poor finishing his team would have earned promotion to the Championship.

City came 5th in 2016/17, repeating their league finish of a year before. And the season before that they had been 7th. We spent three seasons, knocking loudly on the door to the Championship. And when we fell away in 2017/18, there was huge disappointment to merely still be in League One. Never mind getting relegated the year after. Ultimately, as a club we want to get back to where we were between 2015 and 2017 – and then, this time, take the leap into the second tier.

All of this means the 2019/20 is so far proving to be a strange season. Results are better than many us had feared in the summer, and the players and manager deserve credit for the way the club has started to recover from last season. But there remains an undercurrent of frustration that we can still do better. The football isn’t always great to watch. Performances aren’t hugely convincing. It keeps feeling as though there is more to come, but we’re yet to see it. A crippling injury list has been a factor, but is not the sole reason.

When City lose, like against Plymouth on Saturday, the knives of criticism feel that bit sharper. Losing at League One level isn’t great, but losing in League Two feels even more disappointing. Patience remains thin, and there aren’t too many players deeply loved by fans. Even of those from last season who have turned it around, there’s an air of holding back from heaping them with praise and acclaim. A few weeks ago, I was chatting to a fellow City fan who admitted that as welcome as it was that these players are performing better, he doesn’t think he will ever be able to forgive them for last season.

It’s meant this season is not quite as enjoyable as it should appear to be. The sense of entitlement is we should be competing in the top three. It’s not a given at all that we would be up there, but it doesn’t feel like a shock either. No one is suffering from nose bleeds.

There’s not a game we’ve gone into this season that you didn’t think we should win. So when the team succeed, they’re ultimately achieving what we expect. It’s not particularly fair at times, but it’s almost impossible for the players to exceed our expectations.

It feels very similar to the beginnings of our last drop to League Two, when McCall had his first spell as manager. In 2008/09 in particular, City were in the top five for three-quarters of the season. But even though that meant we won more than we lost, throughout that campaign there was a strange atmosphere and even victories would include sharp criticism. When that team had spells struggling, the mood amongst fans was especially bleak. I remember at the time thinking that it didn’t feel like we were going through a promotion season. That we weren’t really having enough fun to launch into a wild party that May.

At the weekend and through the excellent debating post that is Twitter, I was part of a discussion comparing the current City team – and season – with the 2012/13 campaign. Ask most City fans, and they’d vote the history makers as a better team than the class of 2019/20. Yet, at this stage of the season, the present day City has a better record. They’re on track to win automatic promotion, when the 2012/13 side only scraped up through the final play off slot.

Of course, the history makers had the incredible cup adventures that immortalised those players. But there was also the different backdrop to today, which magnified the overall success. The 2012/13 season was four years on from the collapse in 2008/09, and during the subsequent years the club had gone backwards and looked more likely to fall into non-league than get near promotion. Years of misery gave extra colour and meaning to the belated success of 2012/13. Especially when you factor in the full, painful fall from the Premier League 12 years earlier.

As bad as the past 18 months were going into this season, it doesn’t exactly have the same depth of hardship as 2000-2012 was. It also isn’t long enough for us to lose that entitlement.

So in many ways this is a no-win situation for this set of players. Get promoted, and of course we supporters will be grateful and celebrate. But it’s only righting past wrongs, rather than the club scaling impressive heights. So it won’t be the biggest party we’ve known. Don’t go up, and there will doubtless be a tough inquest.

Ultimately, Bradford City is a football club that has the potential to be playing in the Championship. And until that ambition is realised, it will always seem like we’re underachieving. That’s not a new thing, given the majority of the club’s history has been played out in the bottom two tiers. But with the good times of 2012-2017 still fresh in minds, this is a season about restoring values and climbing back up the mountain. Rather than believing we’re anywhere near the peak.