We return to March 1999, where international tensions are increasing in Kosovo and Britney Spears is top of the charts with Baby One More Time. I reckon she’ll be a one-hit wonder. Meanwhile, Bradford City are top of the First Division and surely on course for the Premiership.

We start the month with a trip to Bristol City, and the bad news is that Stuart McCall is injured, so Paul McLaren comes in. However, Dean Windass is fit enough to make his debut on the right of the midfield diamond, while Rob Wolleaston is in for the banned Whalley on the left.

Windass’ first action in a City shirt is to be fouled just outside the box. Edinho steps up and sticks the free kick into the top corner. For the rest of the half we’re fairly poor though, and are indebted to keeper Gary Walsh for some fine saves to keep us ahead. In the second half we don’t get much better, but Jacobs makes it 2-0 when Mills’ initial shot is saved. 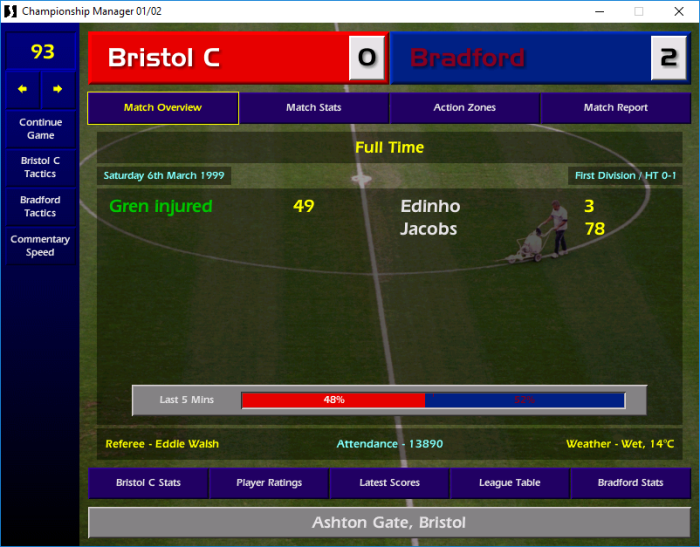 Before our next game there’s a bid for Edinho from Santos. They get a two word answer, the second of which is “off”.

We’re unchanged for our home game against QPR, but we continue our performance from the Bristol City game. This time, Walsh doesn’t save us and our opponents are better – Steve Slade heads in a corner for 1-0 and a Gallen volley makes it 2. Moore heads in a Jacobs corner to pull one back in the second half but it’s not enough. 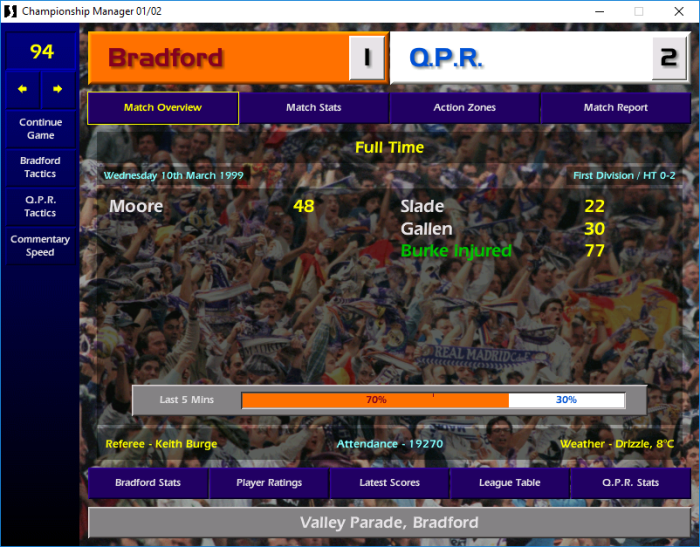 The issue is midfield – with McCall, Whalley and Beagrie all out we’re short there, and McLaren and Wolleaston just aren’t good enough. Our next game is a trip to second place Wolves, and I have to gamble. McCall isn’t fully fit, but he’s got to start. Bolland also comes in for Wolleaston.

We play really well, so naturally it’s Wolves that take the lead through Gomez Colomer. In the second half we continue to dominate, and we’re still not scoring…until Jacobs takes a corner and Moore volleys an equaliser.

Sadly, we can’t get a winner, and Bolland goes off injured late on to add to our midfield worries, but a point is fine. We remain 9 clear of Wolves, though they have a game in hand.

Thankfully, Whalley is back for suspension for the home game against Oxford, so he comes straight back in. We start well, but we’re not testing the keeper enough until something very familiar happens. Jacobs takes a corner, and Moore scores from it – that’s happened for our last three goals now.

In the second half Whalley makes it comfortable, adding a second from a Windass cross, and I’m able to sub Windass and McCall early to rest them. 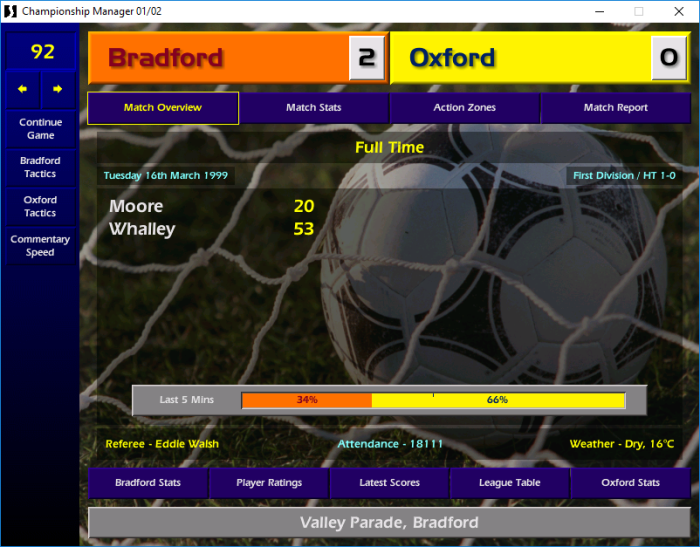 Wolves draw and temporarily drop behind Stockport into third, but then win their game in hand to go back above them. At the other end of the table, Bury are relegated.

Man City come in with a bid for Stephen Wright – I’m very tempted, but don’t have the cover at right back to let him go.

The last game of March is a big one – a trip to third placed Stockport. We’re missing Wolleaston and Beagrie through injury but are otherwise full strength, which means Whalley, Windass and McCall in midfield.

We do exactly what we need to in the game, producing one of our best first halves of the season. First, a Jacobs corner isn’t cleared properly and O’Brien sets up Edinho. Second, Edinho crosses for Mills to head in. Third, McCall chips a free kick for Edinho to volley – a bit like the McCall-Blake free kicks we did in real life.

In the second half Ian Moore pulls one back with an excellent solo goal, but it ends 3-1 and we’re 14 points clear of third place with seven games to go.

We’re also guaranteed a spot in the playoffs, though we win no individual awards for March.

We start April by welcoming Sheffield United to Valley Parade. They’re in form – Steve Bruce just won manager of the month – but we owe them one after they hammered us in the return game.

Blake puts us in front early on, but Michael Twiss grabs an equaliser midway through the first half. However, Blake isn’t done yet and sets up Windass to score his first goal for the club.

In the second half we finish them off – Windass seizes on a loose ball and smashes in a third, then Blake finishes a Whalley pass to make it 4-1. We have our revenge, and we’re closer than ever to promotion.

Stockport drawing means we need to win one more game to go up.

The team of the season is announced, and all of our front three make it in, while Stuart McCall is on the bench.

We can seal promotion with a trip to Tranmere, and I name an unchanged team. The first half is very open but no team gets on top and nobody scores. In the second half, we take control but can’t score. Edinho hits the bar, Windass hits the post, Blake hits the bar.

Finally, Edinho takes a free kick which the keeper can’t hold on to and Whalley puts us 1-0 up. Surely we’re going up! The Premiership awaits!

Three minutes later Lee Todd gives away a penalty and it’s 1-1. We didn’t deserve that. Meanwhile, Stockport win so we aren’t going up this week.

We welcome Portsmouth to Valley Parade for the second attempt at a promotion party, and we’re unchanged again.

This time we actually score our chances – Todd makes amends for giving away the penalty against Tranmere by setting up Blake on 36 minutes, then Blake crosses for Mills to head in a second. Edinho makes it three in the second half, and we are going up! 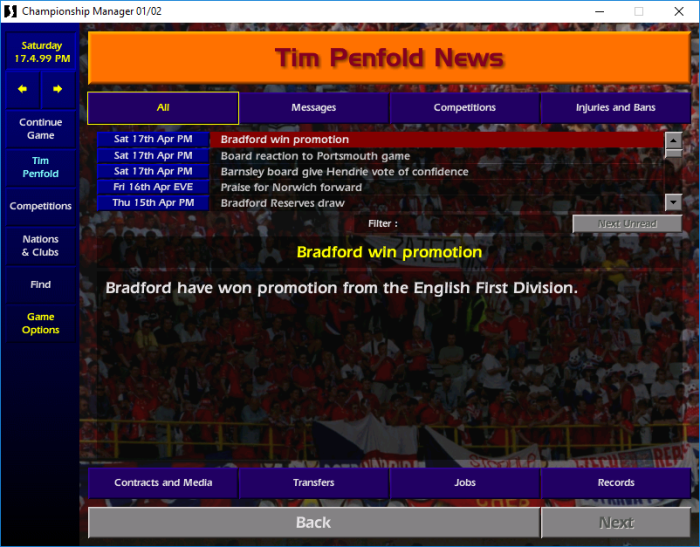 Turns out we went a bit overboard in our celebrations, because we start the next game at Crystal Palace in a bizarrely violent manner. Windass headbutts someone and gets sent off, then Edinho kicks out and is lucky to stay on.

I have to switch my team around, with Beagrie coming on to reinforce the midfield. He then limps off with three minutes to go, but the game, after the dramatic start, is an uneventful 0-0.

Windass gets a 4 game ban, but it’s delayed so won’t start until the last game of the season.

Our next game is a trip to Huddersfield. We’re on 99 points, 7 clear of Wolves with three games to go. If we win this, we win the league. I name an unchanged team, with Gordon Watson coming on to the bench for Beagrie.

It’s a rout. A glorious, glorious rout. Whalley sets up Edinho after just two minutes, then Blake’s lofted pass gives Mills an easy tap in. McCall then crosses for Mills to volley in, before crossing again for Blake, and it’s 4-0 after just 26 minutes.

In the second half Gordon Watson comes on to a chorus of boos from the Huddersfield fans, and responds by setting up Gareth Whalley for a 5th. We are the champions, and we’ve done it in style!

The fans celebrate wildly, and call me the best manager we’ve ever had. I’m flattered, but I’m not sure they’re right. Not yet, anyway.

Our last home game is against bottom club Bury. They have three wins all season, and I have no idea how Neil Warnock hasn’t been sacked yet.

Wayne Jacobs’ corners have been a huge source of goals for us, and in the first half he creates goals for both O’Brien and Moore. In between these Edinho sets up Mills, and it’s 3-0 at half time. Mills makes it four in the second half, heading in a Blake cross.

Our final game of the season is a trip to Norwich. This game is huge for them – they’re 6th, ahead of Sunderland on goal difference with Bolton two points further back in 8th. They’re surely hoping we have hangovers, but we don’t, and after a dominant first half Gareth Whalley makes it 1-0 right on half time. We don’t add to this lead in the second half but Norwich just don’t threaten, and we cruise to a 1-0 win. As a result, Norwich finish 7th. 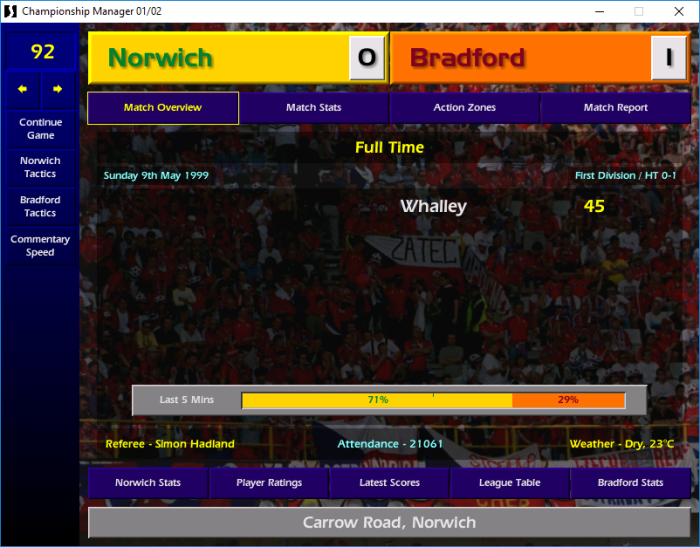 We are the champions, after a superb season. Wolves did really well to mostly keep pace with us and finish second, while Stockport fell apart over the second half of the season. However, they somehow won the playoffs so will join us in the top flight. 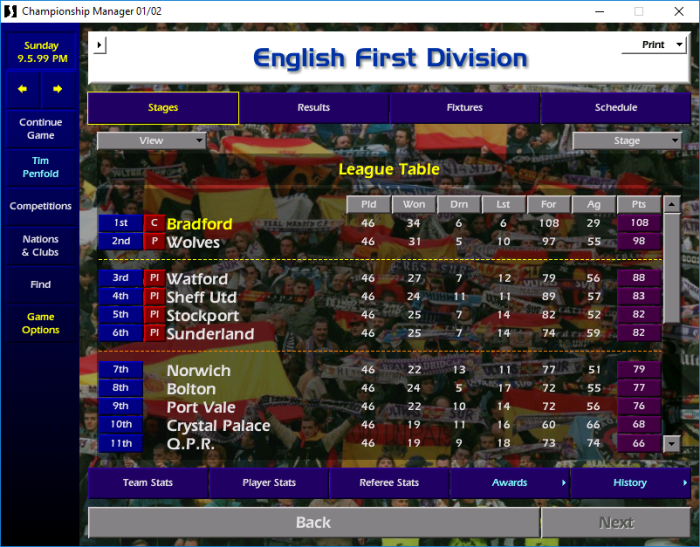 It’s been a superb season. The front three of Blake, Edinho and Mills were unplayable, whilst in midfield Stuart McCall was superb and Dean Windass proved an impressive addition. Our defence of Todd, O’Brien, Moore and Jacobs was rock solid ahead of Gary Walsh, with Jacobs setting up 21 goals, mostly from corners.

Meanwhile, I only had to play Craig Ramage once all season, which I’m counting as a success. 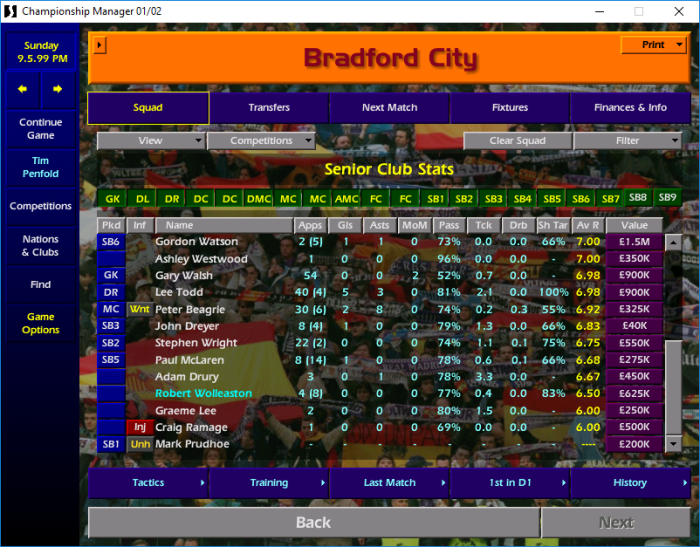 I’m going to need to reinforce this team for the Premier League, but I think we can make a good go of it – this team is definitely good enough to stay up already. I just have to work out which real-life City players can improve us.