It’s the beginning of the summer of 1999. The Cricket World Cup is about to start in England and I am confident that Alec Stewart’s side can compete. In the non-sporting world, the Labour government has taken a kicking in the local elections, and Tony Blair is strongly pushing for a full NATO intervention in Kosovo including ground troops.

Meanwhile, my Bradford City side are preparing for life in the top flight after sweeping all before them in the First Division last season. I’m lining up transfer targets, but I’m limited to signing players and staff who have played for (or at the very least been on the books of) City in real life.

I start my summer business with a key new contract. Lee Mills has one year left on his deal and has been refusing to sign a new one, but promotion and an increased budget has changed his mind. 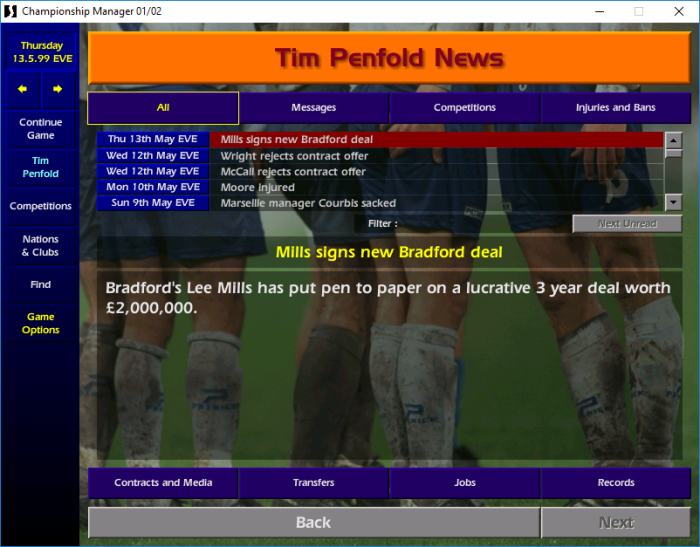 There’s also some outgoings, as I sell backup keeper Mark Prudhoe to Hartlepool and release young forward Andrew Patterson, whilst I recruit Eric Nixon, who spent two separate loan spells at City, on to my coaching staff.

As well as sorting out transfers, there’s also awards season to deal with, and I win manager of the year for the First Division. Our player of the season award goes to Edinho, and it’s richly deserved. 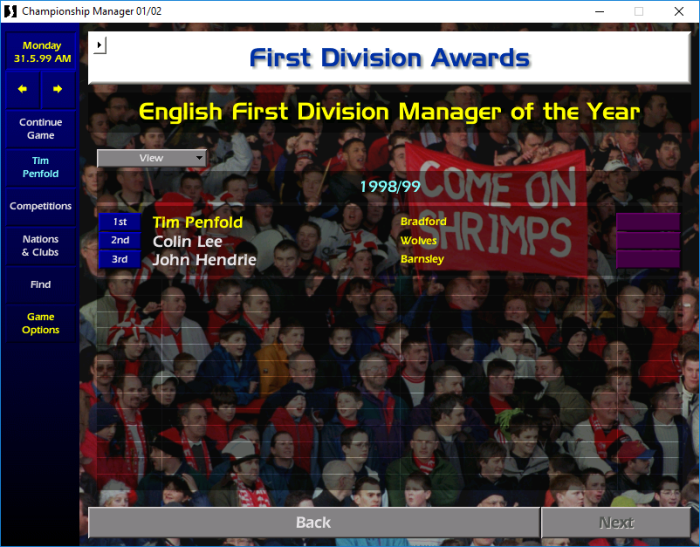 Edinho is proving popular outside the club, as Arsenal make a bid for the Brazilian, which I reject. There are also bids for Andy O’Brien, Darren Moore and Paul Bolland, the latter of which I seriously consider before saying no.

The arrival of Premiership TV money loosens the purse strings, and I bring in several signings. The biggest one is Peter Atherton from Sheffield Wednesday, who provides cover in a few positions, most importantly in defensive midfield where I’m not expecting Stuart McCall to play ever game. We also pick up two younger players for the future – Paul Heckingbottom from Sunderland and Michael Standing from Aston Villa.

I also need a backup keeper, as Prudhoe has gone and 3rd choice Neville Southall has retired. Unfortunately Matt Clarke moved to Brentford partway through last season, but I do have another option, though he’s a bit pricy. Alan Combe joins to compete for the number 1 shirt with Gary Walsh.

There’s still a couple more positions that need strengthening, but I also bring in welcome extra funds when Craig Ramage finally leaves! He cost me £250k by turning down that offer last season.

I’m still after defensive reinforcements, but West Ham won’t let Andy Myers go despite his struggles since joining them from Chelsea, so I raid relegated Nottingham Forest for Alan Rogers. I also make a bid for Ronnie Wallwork ,who has been released by Man Utd, though we’re not the only ones after him.

And finally, after a summer of wheeling and dealing the season begins away at Blackburn. McCall is injured, so Peter Atherton starts in defensive midfield, and there’s a debut for Alan Rogers in place of Jacobs at left back. Combe and Michael Standing are on the bench, while Whalley and Beagrie start in midfield as Dean Windass is banned.

We get off to a flying start and Blake sets up Edinho after just two minutes. We’re top of the league! Hope it lasts. Later in the half Edinho grabs a second, hammering a shot into the top corner at the second attempt.

In the second half, Matt Jansen pulls a goal back but we’re not worried for very long as Gareth Whalley chips a pass for Mills to head in. Blackburn are pushing but we punish them late on, as a Peter Atherton cross reaches Mills, and after his header is saved Edinho completes his hattrick from the rebound.

We’re not even finished then, as another Atherton cross is hammered in by Lee Todd for a 5th. It’s a great performance, only slightly tarnished by substitute Stephen Wright getting injured for two months. 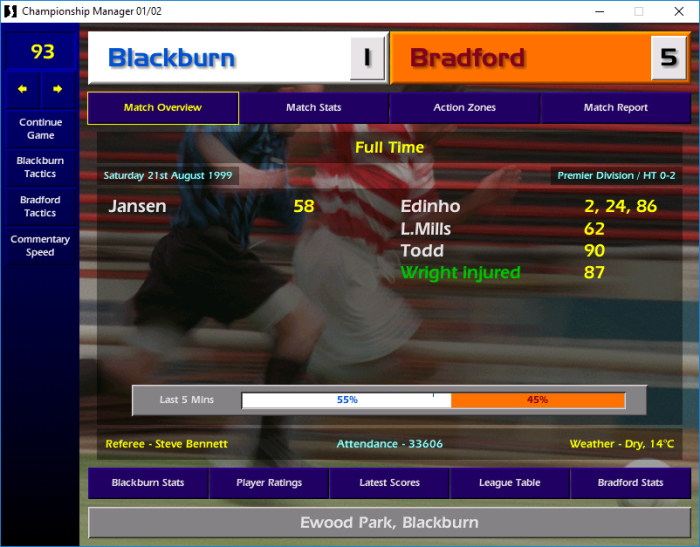 We’re actually top of the league!

Before our first home game we get our first senior international callups since I took over. Andy O’Brien and Gareth Whalley are in the Ireland squad, while Alan Combe has been called up for Scotland.

Our first home game is against Spurs, and I make one change, with Jacobs coming in at left back for Rogers. We play well, but we can’t create enough chances or test the keeper enough, and he saved it when we do. We’re also denied a last minute penalty, and the game finishes 0-0.

Our next game is a trip to West Ham, but there’s more international news as Isaiah Rankin is called up for the England U21 squad. He joins potential signings Danny Cadamarteri and Darren Holloway in what looks like a weak squad.

We’re unchanged for the West Ham trip, and get off to a bad start when Andy Myers sets up Paul Kitson for an early goal. We struggle to match the hosts, and Darren Middleton makes it 2-0 just before the half hour mark. Edinho pulls one back shortly after but Rob Lee makes it 3-1 and we’re looking down the barrel of a hammering.

Just before half time there’s a turning point, as Mike Flynn (not that one, the ex-Stockport defender) lunges in two-footed on Blake in the box, giving away a penalty and getting sent off. Lee Todd scores the penalty and it’s 3-2 at half time.

We’ve got 45 minutes to get something against ten men, and spend the second half pushing, finally getting an equaliser through an Iriekpen own goal. We continue pushing for a win, and a chance falls to Rankin. The commentary says he can’t miss.

That’s still not it though, as in the last minute Peter Atherton hits the post. It ends 3-3, and will go down as a classic game.

We get through to the end of the month in a good position, and reinforce the team when Ronnie Wallwork finally signs on a free. 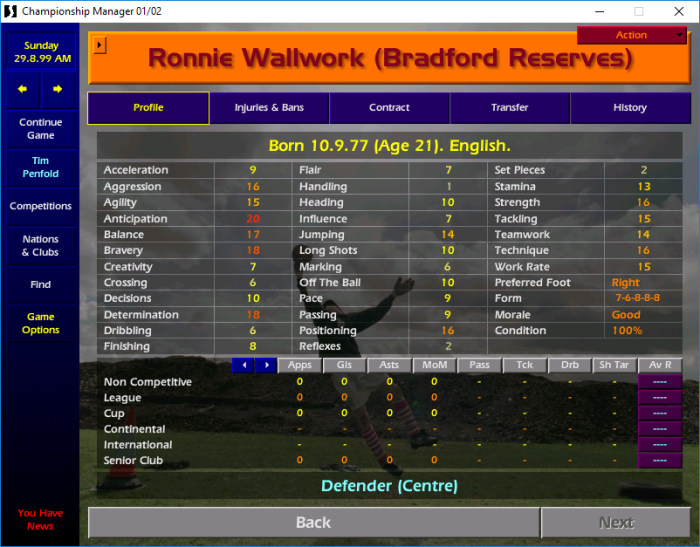 We’re 6th in the league and unbeaten, and playing well. 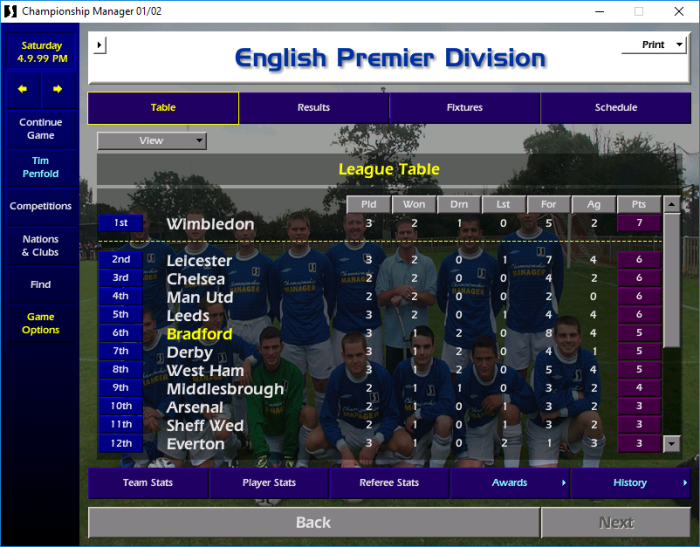 There’s one final bit of good news to round off the month. There’s an injury in the senior England squad, and they’re looking for someone to fill the gap. Glenn Hoddle looks at his options and settles on Lee Mills. MILLSY FOR ENGLAND!

Now we just need a Brazil call-up for Edinho. Can you imagine an Edinho and Ronaldo pairing up front?