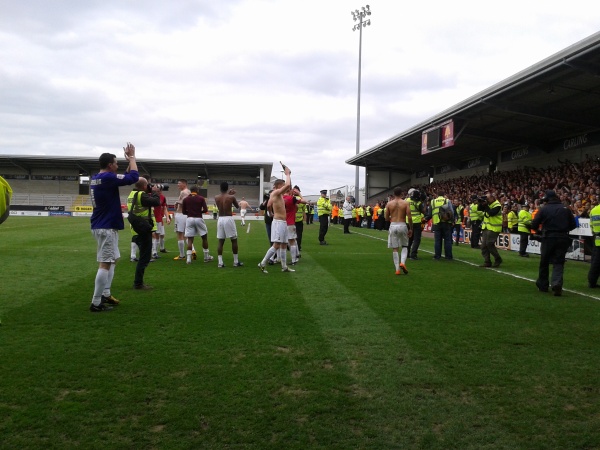 Another excellent performance from the in-form keeper, who in recent weeks has made a string of fine saves. Sunday at the Pirelli was no different for Jonny Mac – City’s No.1 denied Burton’s Robbie Weir in the first half with a great full stretch save, and in the second 45, straight after Wells had put City 3-1 up, he produced a key save to deny Burton a route back into the tie.

After Thursday’s difficult performance on both a team and individual level, Stephen Darby was back to his best on Sunday. As many have stated previously he is a Mr Reliable team member, but at Valley Parade last week he couldn’t deal with Burton’s danger man, Jacques Maghoma. At the Pirelli, the only real time Maghoma beat Darby was for the home side’s penalty, when City’s right back got sold with a brilliant piece of skill by the tricky winger.

Thursday night highlighted how much we need and miss Andrew Davies. At Valley Parade, Calvin Zola had the beating of Nelson and McArdle; but put Davies into the equation and Zola just sits in his pocket. In the whole game I can only remember the big striker turning Davies once and he sliced it high and wide. Personally my man of the match. Davo was immense.

Bring back Davies and Rory McArdle looks a different player. I’m not knocking Nelson, but as a player surely you’d want to play alongside Davies – who game in game out performs excellently and ensures his fellow defenders stay calm. The return of Davies allowed McArdle to look after either Maghoma or, later in the game, Billy Kee. And his performance was far better than Thursday – the marathon man was back to his best.

I thought Thursday night’s first leg defeat was one of the worst performances I had seen James Meredith have in a City shirt. But again, like Darby and McArdle, the Aussie was back to his best at the Pirelli. A calm confident performance; getting himself forward whenever possible and linking up well with Reid. A play off final appearance is the least Mezza deserves after illness cruelly denied the left back a League Cup Final appearance.

My man of the match from the first leg had another good game at Burton; although Garry Thompson’s needless rash tackle on Maghoma, which resulted in the penalty (not fully convinced it was in the area), had the potential to have grave consequences for the Bantams. One of the star performers in the second half of the season, Thompson will again be hoping to start at Wembley in a couple of weeks time.

Magicman Gary Jones had a poor game by his very high standard on Thursdays, but on Sunday he was back to what we have all come to expect. He leads from the front and is a true inspiration to his team mates. Jones’ full time celebrations typified the man – I’ve never seen a non-Bradfordian or home-grown player show so much passion for the club. A club legend already and, if that’s a little early, lifting the play off final trophy in a couple of weeks’ time would surely grant him such status.

Sunday’s game was Nathan Doyle at his best. A physical performance that we missed badly in the fist leg, where Burton dominated the midfield area. Doyley lost form after the League Cup Final, but his performance at Burton will probably put him in the starting line up for Northampton and rightly so in my opinion. On their day there isn’t a better midfield partnership in the division than Doyle and Jones.

A steady game by Kyel Reid, lively at times and did his fair share of tracking back when required. Hopefully he can stay fit over the next couple of weeks and get onto the Wembley turf, to make up for his disappointment of not playing in the Cup Final.

The big man again shone at Burton. Often James Hanson goes under the radar when it comes to praise, but his performance on Sunday alongside Wells was immense. His goal was sensational – a first time strike on his weaker foot! In the words of Andy Gray (not ours!) ‘take a bow son!’

He dominated the Burton backline in the air and held the ball up numerous times to bring others into play. Similar to the Doyle/Jones partnership, as strike forces go in League Two, Hanson and Wells have to be amongst the best. He could have made the afternoon a lot easier had he put away what seemed an easy chance late on, ballooning his shot high and wide.

It’s all or nothing with Nahki Wells. On his day he is unplayable, but on other days it’s like playing with 10 men. Thankfully, when it really mattered, Wells rose to the challenge. He worked the channels really well and ran himself into the ground for the team. His first goal came about because he gambled about the header falling short to the keeper. His second was a typical striker’s goal, getting on the end of Hanson’s knock down before turning the defender in the 6-yard box and slotting home.

Wells will be hoping to get more game time this time around at Wembley compared to last February, when sadly he had to depart after Matt Duke was given his marching orders. If Wells is going to leave for a bigger club in the summer, then what better way to sign off his time at Bradford than firing us into League One?

Didn’t have that long on the field to make a massive impression, but Will Atkinson provided cover for Meredith when required and should have won a penalty when his cut back was clearly handled in the area.