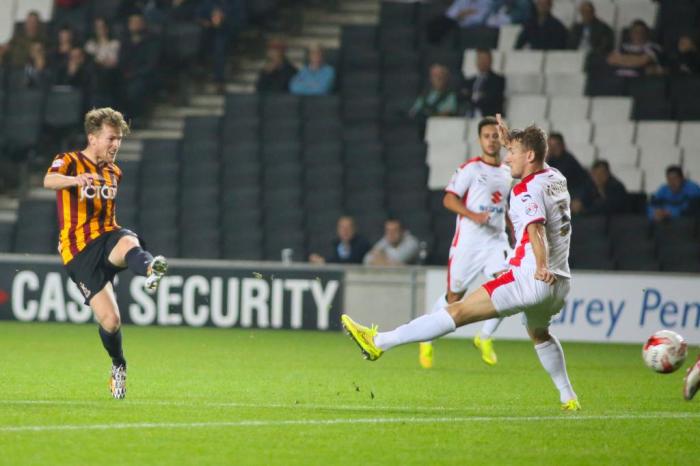 Let us indulge in some Premier League-type hyperbole, and declare this fixture a must-win game for Bradford City.

It is not must-win in the sense that promotion or relegation is at stake. But in terms of the general mood around the club, this one really matters. Crewe Alexandra are bottom of the league after a wretched start to the season. For the Bantams – winless at home in the league since the opening day – a failure to take maximum points this weekend will prompt a hugely negative reaction.

They simply have to get this one right.

Crewe’s record is won one, drawn one, lost eight. Their last three results read MK Dons 6 Crewe 1, Crewe 0 Colchester 3 and Crewe 0 Notts County 3. In 10 league matches, they have conceded 27 goals – they are shipping them at a rate of one goal every 33 minutes. It is the worst defensive record in the top four divisions.

Even at this early stage of the season, Crewe are five points from safety. It is going to be a very long season at Gresty Road.

Bradford City’s record against teams who, at the time, sat bottom of the league was wretched last season. From four games, just one point – at Crewe last November – was gained. A New Year’s Day thumping at Notts County, a messy loss to a desperate Stevenage, a pathetic showing at doomed Shrewsbury Town. Horrible, horrible days at the office. Sadly typical of Bradford City over the years.

But they can’t afford another one this weekend. Crewe are hardly going to lie down and allow City to stride to victory, but their dismal start to the campaign isn’t exactly a fluke. They are bottom of the table for very good reasons; and any points they gain at Valley Parade will go down badly amongst home supporters. For the players, the pressure is on.

Two months into the season, the Valley Parade mood remains volatile and has been subject to sharp bouts of both positivity and negativity. The warm glow of satisfaction that came from a week in which Leeds and Rochdale were defeated has become a distant memory, given it has been followed by home failings and a struggle to score goals. The impressive league victory at MK Dons was observed by just 250 City supporters, meaning the vast majority of us have not seen our team win since August.

For however encouraging the league table has looked at times during the first two months of the season, it hasn’t always been reflected in the supporter conversations and debates around games. Even after the MK Dons triumph, everyone still seemed to be moaning about the Swindon loss.

And at this point of the season, what’s needed is a positive statement of intent. A good home victory, and ideally a strong performance to go with it. An endorsement that the diamond formation is the right strategic approach. A reminder of the quality within the squad. Reassurance that there are goals in this team. Encouragement. Confidence. Uplift. 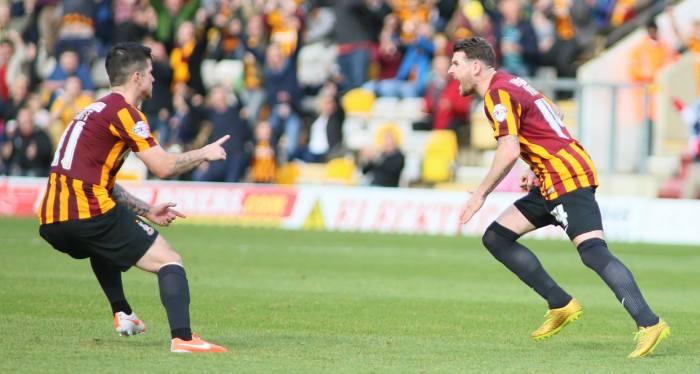 They couldn’t ask to face better opposition for restoring the feel-good factor, and yet equally they couldn’t ask for worse opposition to slip-up against. Get it wrong against Crewe this weekend, and duck for cover. The boos, the anger, the outbursts on social media, the message board threads. There are some supporters already convinced that City are going to be embroiled in a relegation battle this season, and dropped points on Saturday will only add weight to their argument.

This game – and the trip to fourth-bottom Barnsley a week on Sunday – should be an opportunity to get points on the board, especially ahead of an altogether much tougher couple of fixtures against the highly-fancied Sheffield United and league leaders Bristol City. It could prove to be a long and difficult October if City don’t begin the month in the right manner.

And the prospects for doing so are expected to be boosted by the return of key players from injury. Chiefly, Andrew Davies could potentially be in line for a first outing since breaking his arm during August’s home defeat to Peterborough, nine games ago.

Who he would replace in the centre of defence will open up a sizeable debate, although it is unlikely that Phil Parkinson will be in any doubt. Expect Rory McArdle to remain, with Christopher Routis making way for Davies. Routis has enjoyed an encouraging start to life at Valley Parade, but was in truth fortunate not to be sent off last week after a poor second half challenge – when already on a booking – went unpunished.

If Davies is back, Parkinson will be able to select the back four that he has deployed so regularly and to such great effect for the past two years: Stephen Darby, McArdle, Davies and James Meredith. So familiar and yet it will be something of a novelty. They started together at Walsall in August. The last time before that day? October 5 2013, for the previous season’s trip to Walsall. Almost a year ago to this day.

Also potentially back is James Hanson. City’s top scorer was injured during the warm up for the MK Dons league game, and has been increasingly missed. After the first 45 minutes without Hanson saw Aaron Mclean and Billy Clarke net goals at Stadium:MK, the Bantams have failed to score from open play in three-and-a-half matches.

There are some supporters who attempted to claim that the new-look City are better without Hanson – a few even suggesting that he should be sold – but the reality has proven very different. With five goals from nine starts in the diamond, Hanson continues to be a huge player for the club. No other City striker has been anywhere near his performances this season.

If Hanson is fit to start, Clarke will either be pushed back into the diamond or – more likely – benched. Clarke’s summer arrival, following his release by Crawley Town, hardly set the pulses racing. Yet the 27-year-old has enjoyed a good start to life at Valley Parade, if fading of late. In my view, Clarke is much better suited to playing at the tip of the diamond rather than as part of the front two – his best work comes outside the penalty area.

Without Hanson, Parkinson had little choice but to move Clarke back up front, with Mark Yeates brought in to play in the hole. Yeates has performed very well – man of the match last time out – and so Clarke is unlikely to be dropped back into hole for the moment. He may find that he is the long-term loser from Hanson’s spell out of the team.

Elsewhere, Matty Dolan may push for a place in the diamond four, given it struggled last week – Jason Kennedy and Billy Knott having poor games. Gary Liddle, back playing in front of the defence, was back to his best form. Liddle is unlikely to command many headlines this season but is proving himself to be a key player with good mobility. A very astute piece of business by Parkinson.

Certainly the manager’s opposite number on Saturday would dearly love to be able to call upon such experience. Steve Davis is clearly under heavy pressure, although claims to have the backing of his board. During the summer Byron Moore (who always seemed to play well against City) departed to bitter rivals Port Vale, and AJ Leitch-Smith moved to Yeovil (for whom he scored impressively against City last month). Chris Atkinson, who spent the second half of last season on loan at Valley Parade, where he figured just four times, was amongst the most notable close season signings.

As usual, Crewe are heavily reliant upon their high-achieving youth set up. Five of their starting XI against Notts County graduated through their academy, and Davis has talked of blooding more youngsters at Valley Parade, as “at least they would run about”.

There is still a long way to go in the season and Crewe are hardly doomed yet, but their awful form suggests a club in disarray. One that is completely there for the taking. City must take advantage of that situation, or face a long week of difficult questions. Patience is already wearing thin at Valley Parade; and though much of the negativity is out of perspective and unfair, it will be very difficult to defend any slip ups this weekend.