Christopher Routis can have a big future at welcoming Valley Parade 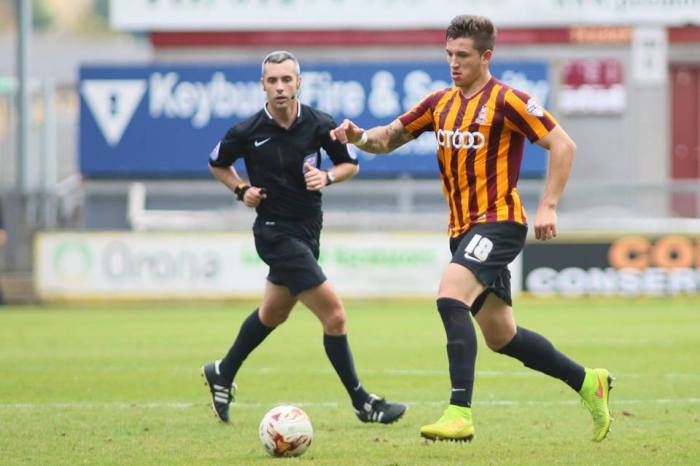 From the Brazilian Edinho to the Central African Republic’s Kelly Youga, Aussie stopper Mark Schwarzer to Chilean misfit Willy Topp – we do love our foreign players at Bradford City. Almost all of them have brought an exotic flavour to the table, which ensures they stand out from the crowd.

Christopher Routis is the latest foreign import to make a striking early impression; with the Swiss-born, French passport-holder very quickly elevated to cult hero status following his summer arrival. The 24-year-old opened his goalscoring account for the club with a vital equaliser at leaders Bristol City midweek, and injuries, suspensions and the indifferent form of others offer him an opportunity to nail down a first team jersey. All he needs now is a catchy chant.

The mystery around foreign players guarantees them a more favourable welcome by supporters compared to British players of a similar ilk. We know next to nothing about Routis, who has one of the emptiest Wikipedia pages you will ever see. His track record of previous clubs is limited to the youth set up at Libourne-Saint-Seurin (whose first team play in the sixth tier of French football) and Challenge League club Servette (the second tier of Swiss football).

We have no idea how good or bad Routis fared for these two teams (although these stats suggest he did play plenty of first team football at Servette) – frankly we don’t want to know. It provides a sense of intrigue that is too often lacking in the British players City sign – or even the foreign players we sign, who have played for other British clubs.

Contrast the unknown track record of Routis with fellow summer arrival Filipe Morais – the Portguese winger started at Chelsea and subsequently played for MK Dons, Millwall, St. Johnstone, Hibs, Inverness, Oldham and Stevenage – and who has the better track record? The guy who has never played in England before, of course. Morais and his 200+ career appearances include failures that blotch his CV. Routis has never failed elsewhere (that we know about) and so there is no evidence to suggest he will do so here.

We know nothing of Routis, who rocked up on trial in the most unglamorous of surroundings – Ossett Town’s Ingfield stadium. Introduced for that evening’s reserve friendly game as Christophe – which sounds more glamorous than Christopher or Chris – he looked okay but was part of a team that fared poorly against non-league opposition.

Routis remained on trial and performed much more impressively in first team home draws against Blackburn and Hartlepool – plus another reserve team friendly at Bradford Park Avenue – and it was no surprise he was offered a permanent deal. A potential useful back-up option to a defence that suffered a sizeable number of injuries last season.

And in time, Routis has received opportunities and taken them very well. His debut at Oldham in the Johnstone’s Paint Trophy was decent, and it was evident that the Swiss/Frenchman’s playing style was one of bringing the ball out of defence and passing, rather than hoofing. He did not appear the strongest physically, but read the game very well.

The word is cultured – and only foreign players ever get to receive that positive label. Again it is the exoticness of a background that we cannot visualise. He wasn’t brought up on bumpy English park pitches, with an overbearing youth team coach yelling at him to “get rid”. He learned to play the game the right the way. To caress the ball, rather than be scared to receive it.

He is cultured to us, and being cultured sounds great.

And at a time where there have been very loud supporter demands for a more attractive style of football, Routis represents a tangible move away from the direct style of play of before. He is a contrast to Rory McArdle (who incidentally is having a very good season). He is different to Andrew Davies, for that matter. A ball player from the back is something that we have not seen at Valley Parade for some time. Steve Williams threatened to be that defender before his career went the wrong direction. Prior to that, you probably have to go back to Sergio Pinto and then the late Dean Richards (though being English he was rarely classed as cultured).

Routis has also demonstrated his versatility. I really liked him at the base of the diamond last week, and though I don’t think he is a right back, he has filled in effectively over the last one-and-a-half matches. Sometimes being a jack of all trades counts against a player. But with City’s squad lacking depth, there should be numerous opportunities for Routis over the coming months.

But in front of him right now is arguably the biggest opportunity of all – the chance to be Andrew Davies. The only disappointment of Tuesday’s creditable draw at Bristol City was yet another injury for Davies, which means he could be on the sidelines for a spell once more. Davies has already played less than half of the games this season, and over the previous two years it is a similar patchy tale.

We know that Davies’ injury record is the downside, outweighed by the positives of having a player who is too good for this level – but how long does this go on for? Last season’s ‘one in 21’ was a tale of struggling to cope without Davies. City have fared slightly better this time, but no one has nailed down a starting centre back berth alongside McArdle. Alan Sheehan’s form has been patchy.

Which means the left-sided Routis has as much of an opportunity as anyone to become first choice centre back on the left and to prove he can forge a relationship with McArdle. Davies is out of contract this summer, and if his so far lack of availability carries on for the rest of the season, it’s probably going to lead to a reluctant parting of ways. Davies is the best centre half City have had since David Wetherall – but his high wages are a burden when he is stuck on the sidelines.

I’m not sure if Routis is ready to be a week-in, week-out starter for City – but we might be about to find out. With Stephen Darby back from suspension this weekend and Davies’ recovery timetable uncertain, Routis has to be favourite to take the vacant spot in the back four.

If Routis builds on his performances of late, cuts out the mistakes he has undoubtedly made, and City continue with their passing team evolution, he can really thrive at Valley Parade. And he will be able to rely upon enthusiastic backing from City supporters, who have always made foreign players very welcome at Valley Parade.

Like Loading...
‹ Bradford City get back up again to claim a point at the league leaders
What is an underdog, anyway? ›