Home › Previews › Bradford City vs Sunderland: The Parkinson era is repeating the happier times of the Richmond years

Bradford City vs Sunderland: The Parkinson era is repeating the happier times of the Richmond years 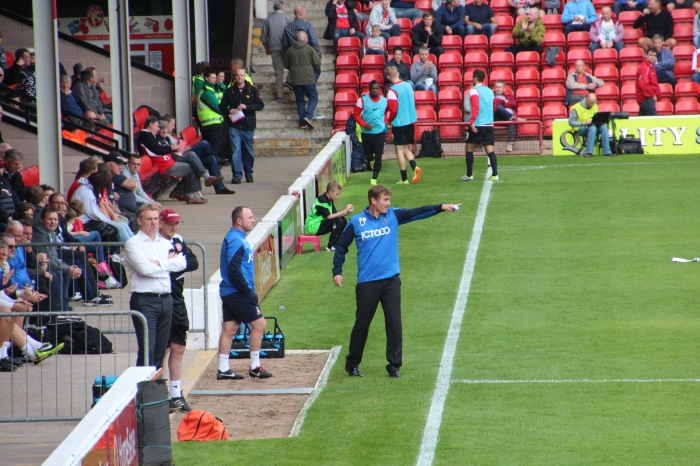 When Bradford City were relegated from the Premier League in 2001, Chairman Geoffrey Richmond reacted to the first set back of his stewardship by commissioning a timely reminder to supporters of all the good times that he had helped to bring.

The result was a video (if you’re under 20, you may have to ask your parents what a video was) entitled ‘Six of the best’, which as the title suggests featured highlights of the six greatest games of the Richmond era. Hull City in 1996, to reach the third tier play offs; Blackpool in those play offs; the Notts County Wembley final where promotion was sealed; defeating QPR a year later to avoid relegation; Wolves promotion to the Premier League in 1999; and Liverpool survival in 2000.

It was a clever confidence trick from Richmond, reiterating the importance of keeping faith with a man who had transformed the fortunes of the club. And it even led to a second video, ‘More six of the best’, that featured Notts Forest 1995 (both legs of the cup upset); Chesterfield in 1996; Everton 1997; Barnsley 1998; and Middlesbrough 1999.

Post 2001, there would be no more games of the Richmond era to justify a third volume of the series; but the 12 games that made it to video go a long way towards encapsulating a magical period supporting Bradford City. From mid-90s mid-table obscurity in the third tier, playing to crowds of under 5,000, all the way to beating Arsenal and Liverpool in the Premier League, in front of sell-out 18,000+ crowds.

1995-2000 was an incredible adventure that caught the imagination of the Bradford public. And the players and manager heroes from this time continue to be fondly recalled and celebrated.

And now, following a 12-year period of some of the bleakest times in the club’s history, it is fair to say that City are in the midst of another unforgettable period of stunning highs. Whereas there was a risk that 2012/13’s History Makers would go down as a one-off season of pleasure, this campaign has contributed its own special moments. In 2012 and 2013 it was exciting to be a Bradford City supporter, and in 2015 that feeling remains the same.

In the summer of 2012, prior to the History Makers campaign, WOAP ran a supporter poll to establish the all-time-greatest Bradford City matches. We counted down from number 30, and the top five games would have come as no surprise to any supporter. They all featured over the two-video ‘six of the best’ series. In fact, seven of the top 10 (and 12 of the top 20) all-time City matches were from the Richmond era.

That poll is now utterly redundant. It needs completely redoing. The top five would no longer be so clear cut.

Where do we rank Arsenal? What about Wigan? Then there is Villa x2, Burton away in the play offs, Northampton at Wembley. And from this season, you can add Leeds United, Millwall and, of course, Chelsea. It is too soon to judge the legacy of these games, but many fans at Stamford Bridge have ranked that stunning 4-2 victory above anything else they have ever seen.

It is a nice debate to have. To be pouring over which of the best was the very, very best.

And yet these moments only represent the highest points from two amazing periods following the club. There was so much more about the Richmond era than two 90-minute videos could ever hope to represent, and there have been so many other brilliant moments from the past three seasons, which have strengthened this mood of outright happiness.

Sometimes it’s not even about the victories, but the excitement around big and meaningful games. The Swansea cup final build up was like no other moment we have ever experienced (just a shame that amazing week concluded with a football match).

In August 2013, 4,000 City fans travelled to Huddersfield Town in the League Cup, bowing out in disappointing circumstances. But even in the wake of this set back, I remember filing out of the Galpharm at full time still feeling excited. We were evidently on a journey. The club was clearly on the up. And the whole atmosphere around Valley Parade heightened the belief that we were living through very special times.

This weekend’s game with Sunderland could prove to be another such moment. Realistically, the FA Cup adventure should come to an end; but the build up to the game, and the guaranteed wonderful atmosphere on the day, means we are guaranteed to enjoy ourselves whatever the result.

The fact that we are overachieving this season provides a greater sense of relaxation about the outcome. This is so much more enjoyable than the League Two relegation pressure games of just three/four years earlier, where winning felt like a relief rather than joyous. The reality that the footballing world is currently watching and cheering for us encourages you to revel in the spotlight that is shining our way.

This happens only rarely.

If we win on Sunday, it would be another incredible day and another fantastic addition to the list of greatest matches. If we lose, we can shrug our shoulders – because losing is the most we can realistically expect. We can look back with pride on another incredible cup run, one that was provided so many great memories, right from round one. We can feel more optimistic about the future given the windfall these cup exploits have generated the club. And we can look forward to the remainder of the League One season; in the hunt for a play off spot that no one expected us to be competing for.

This is not the Richmond era, where the club’s successes can all be traced back to an ambitious, ruthless owner with the skills to implement his vision. This is the Parkinson era. Where the manager has driven stunning improvement, and lifted the Bantams from the brink of non-league football to one of the most admired clubs in the country. And along the way, he has presented us with a treasure chest of wonderful memories and stories that are up there with anything we have ever experienced.

Just like the Richmond days, the Parkinson era is leaving a legacy beyond what happens on the pitch. The crowd has been transformed from cynical to stirring; a generation of younger supporters have been hooked – hopefully for life. The under-performing city that the club resides within has been touched and engaged by what is happening in BD8. The Parkinson effect runs deep.

These are amazing times to be a Bradford City supporter. No one quite knows where the final destination will be, but no one wants to get off this bandwagon anytime soon. Not with Parkinson as its driver.

Like Loading...
‹ Are things back to normal yet?
Bradford City vs Sunderland: Jon Stead has point to prove which can lead him to be Bantams’ match-winner ›