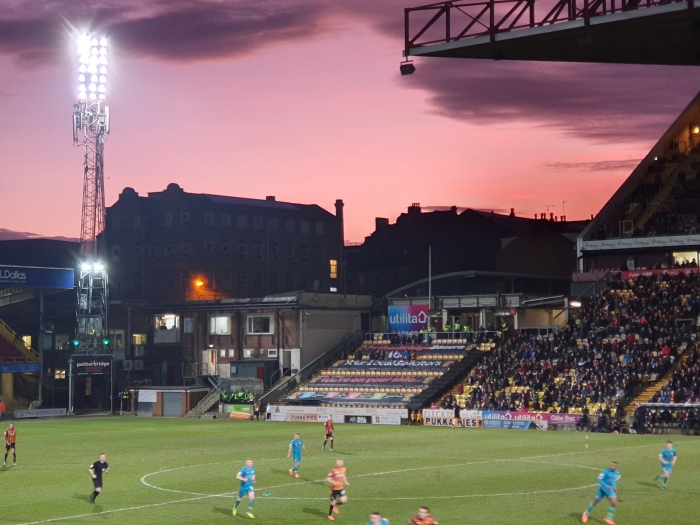 Played 25, won twelve, drawn eight, lost five, goal difference of plus 12. Fourth in the table with 44 points. That is Bradford City’s record so far this season. Handily placed you might say, but there’s a split in the fan base.

Some supporters aren’t happy and others think that those who aren’t happy are daft. One friend of mine has become so annoyed at the “moaners” as he calls them that he’s stopped going on any form of Bradford city social media or websites. Why is there a split and where do you stand on it?

Personally I’m somewhere in the middle. Sat on the fence, can’t make my mind up.

The performances over the Christmas period seem to have only enhanced the split, with supporters on both sides digging their heels in and becoming more entrenched. I said when looking at the fixtures before the Leyton Orient game that we should be looking to win all of the next five games up to and including the Morecambe one on New Year’s Day. I thought as much because of where our opponents were in the table and the form that they were in. But also because I want, and to a certain degree expect, promotion this season. And looking at January’s fixtures, the run of games post Morecambe seemed on paper at least to be a lot tougher.

In the end we drew the first three of those fixtures against Orient, Salford and Carlisle before winning the last two against Mansfield and Morecambe.

I was disappointed not least with the results but also with the manner of the draws and the style of play. I wasn’t alone. Terms such as “Bowyerball” and “Bland Bowyer” seem to have become common place on the #bcafc as fans squirm at the tactics and team selections that they’re seeing each week.

Is this fair? Do fans have a right to complain even if we’re watching a promotion challenge? And should they be taking into account the mitigating factors that have plagued the team this season?

Gary Bowyer has described the injury crisis this season as the worst that he’s ever experienced and that has been compounded over the Christmas period by the illness that has ravaged the squad.

However, it seems that as the season has progressed the performances have become more and more risk averse. We are creating very few chances during games. Why is that?

Well the injuries and absence of key personnel has certainly played a part. Not least the lack of a target man type striker since Clayton Donaldson required surgery on his toe in the middle of October.

This is something that baffles me every year as a City supporter. It seems that no matter who the manager is, who the players are or what year it is, this football club is incapable of playing successfully without someone upfront who can win the physical battles and hold the ball up. Other teams seem to manage without that option, but not us. As someone once said to me, it’s as though it’s in our DNA.

You’d think therefore that we should really have more than one of that type of striker in our squad, but we never do. Last year we didn’t even have one and so we ended up asking Eoin Doyle to play that role. This year in the absence of Donaldson we’ve asked James Vaughan to do it. Neither of them are cut out for the role and neither of them were primarily brought to the club to do it.

Neither of them want to be on the half way line with their back to goal, it’s just not their game and as such we’ve not got the best out of either of them. They want to be in the box with the ball in front of them.

Just look at what a difference it’s made to Doyle now he is being utilised correctly at Swindon. I’d hazard a guess that if Vaughan was to take his place in Swindon’s team that he too would be on the 20 odd goal mark for the season. Thats why I believe that it would be folly to bring Doyle back to City and expect him to continue his red hot Swindon form if we werent going to use him in the same way that they do. 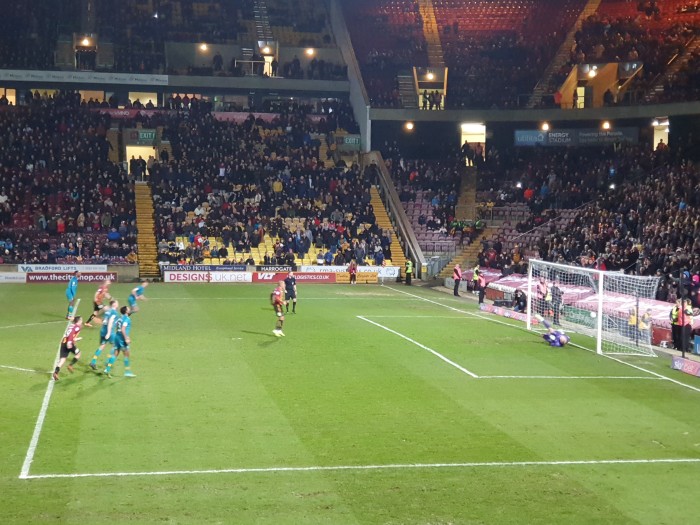 It’ll be interesting to see what changes, if any, we make in the January transfer window. I’ve already said that I’d like to see another striker brought in who can play with his back to goal. Donaldson is reportedly nearly back to full fitness now but there are no guarantees that he’ll stay fit. Whatever additions we make there’ll probably have to be outs before there are any ins given that we are said to almost be at the salary cap.

Midfield looks a well stocked area and probably somewhere where we can allow a couple of departures. Jamie Devitt is also nearing full fitness which will give us an attacking midfield option that we’ve been missing.

Its not just missing personnel that has contributed to our lack of goalscoring chances in recent games. Selection too has played a part. Recently we have been setting up with three central defenders and three central midfielders with only the wing backs providing the team with any width. That is conservative to even the most positive of supporters. It’s even more conservative when two of the central midfielders have been Reeves and Palmer who are both similar types of player. They are both fairly static and like to pick the ball up off the defence and keep it moving. Sadly with little to hit in front of them and no natural inclination to get forward themselves, that movement has mostly been of a sideways nature.

Some fans have called for a formation change to 442 but is it really that simple? Surely if 442 was the golden ticket then every team in the division would be playing that way. Often when people are calling for that formation what they really mean is that they want to play with wingers and two strikers. You’ll also often hear them say that players at this level are most comfortable playing 442. I’m not sure on what basis that statement is made.

There are different variations to the 442 system and it’s vary rare in today’s game that teams will play with two out and out wingers because it can leave the full backs and midfield exposed. Think back to Stuart McCall’s first spell in charge as manager when he often played that way with Joe Colbeck and Omar Daley attacking down the flanks. We were far too open and conceded far too many goals.

However, City fans have been brought up mainly on a diet of 442 and that’s probably partly behind why we struggle to have any success without a targetman. 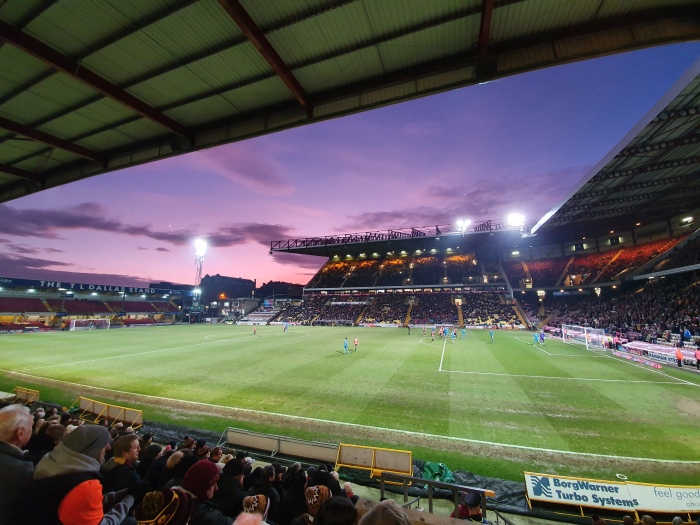 A name often brought up when discussing Bowyer and his style of play is that of Phil Parkinson. One of the most successful managers in Bradford city’s modern era he was also criticised at times throughout his tenure for his industrial tactics. Parkinson did though play a 442 albeit sometimes with one of the wingers namely Will Atkinson tucked in on one side.

You also knew with Parkinson that if we needed a goal in the last twenty minutes or so that he’d have a “right good go” and the tempo would increase. That is something that we don’t always see under Bowyer and much of the frustration over the Christmas period has come from us not asserting our authority when we needed a winner against Leyton Orient and Carlisle.

On the flip side of that you have to consider what the reaction would have been had we changed to a more attacking approach towards the end of those games and then we’d got caught on the break and lost to a classic sucker punch? Ultimately it boils down to how much risk you’re willing to take.

Hes in a tricky position. As Jason McKeown discusses here, there’s s a sense of entitlement amongst the City fanbase at the moment and it’s reminiscent of the Newcastle fanbase when they spent a year in the championship. Fans are aggrieved that we are in league two at all and as such they a) expect promotion as a bare minimum but they also expect b) to do it in style. The problem comes in the heat of the battle when a manager is worried that he might end up forfeiting a) if he focuses too much on b).

It’s a difficult balance to reach and I doubt that we’d be having the debate if we were miles clear at the top of the league. In such a scenario fans would probably be more willing to accept the style of play if we were running away with the division.

In a way we also remind me of Sunderland in League One last season. Their supporters were angry that they were in the third tier and expected promotion at the first attempt. Many of them weren’t too happy with manager Jim Ross’ style of play but accepted it as a means of getting out of the division. The problem for them was that they put up with the tactics as a means to an end but ended up with nothing as they missed out on promotion in the playoffs.

Ultimately it all boils down to what you’d rather have. There’s no guarantees of promotion no matter how you play. You might be happier missing out on going up if the style of play is easy on the eye, but surely most of us would say that getting out of the division at the first attempt is our priority.

Many supporters feel that this team has more potential that it is showing and that is extremely frustrating. We may see a rebalencing of the style/substance trade off when some of the injured cavalry return or when the squad balance of having too many midfielders and not enough strikers can be addressed during the transfer window. But I don’t see the managers main fundamentals changing anytime soon.

Bowyer might feel that he has more of a chance of meeting his minimum target by playing conservatively. As manager thats his perogative. He has to do what he sees fit because he’ll be the one who has to carry the can if we miss out.