Our start to the season was very different to real life in 1998-99 – we’re unbeaten, top of the league and flying. Hopefully we can keep it up rather than fade away.

Our first game in the month is a trip to Grimsby, and it’s a very professional performance and a comfortable win.  We open the scoring when Mills heads a Jacobs cross into the path of Robbie Blake, then Edinho seals the points in the second half after being set up by Beagrie. 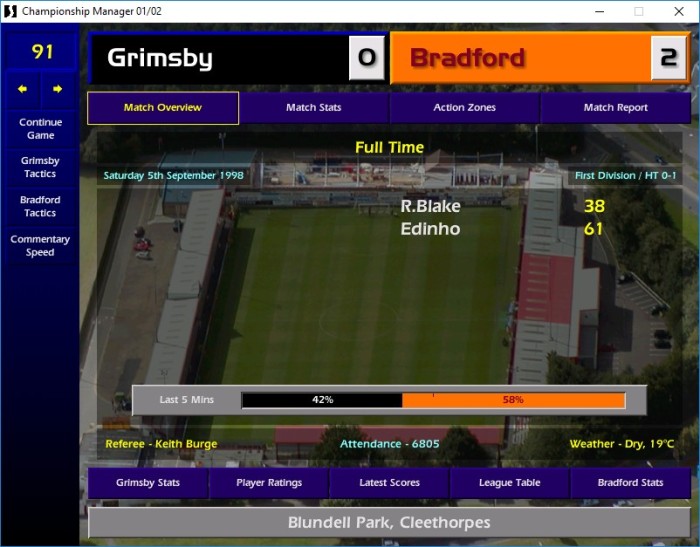 We then face Watford, and get off to a flyer – Edinho has a goal disallowed, then has a header well saved. From the rebound, Beagrie puts it in the net.

In the second half Watford get an equaliser via Eifion Williams, but Lee Mills goes straight up the other end to make it 2-1 and Edinho heads in a Beagrie cross to make it 3.

We then travel to Swindon, and basically repeat the Grimsby performance. A goal in each half from Mills and Edinho keeps the Bantam juggernaut rolling on.

We then face Sunderland at home, which is a big game – Sunderland aren’t having the season they had in real life, but are still a very dangerous side.

We grab an early lead via Robbie Blake, then Stuart McCall swings over a free kick and Mills heads in to put us two up at half time. After weathering a Sunderland fightback in the second half McCall sets Blake free in the 73rd minute and it’s 3-0. Probably our best performance of the season so far. 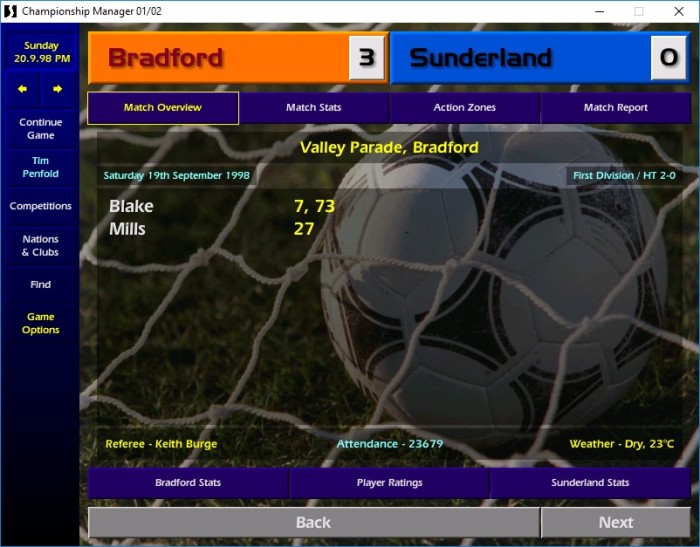 We take a break from League action to face Norwich in the league cup. I rotate a bit, with Isaiah Rankin amongst those getting a start, but it’s Mills who gives us the lead from a Blake cross. However, the rest of the game is bad news – not in terms of the result, as we win 1-0, but Blake and Jamie Lawrence are both injured, leaving us short in midfield. Our lack of reinforcements in that area are hurting us – it’s getting so thin on the ground that even Craig Ramage might get into the squad. 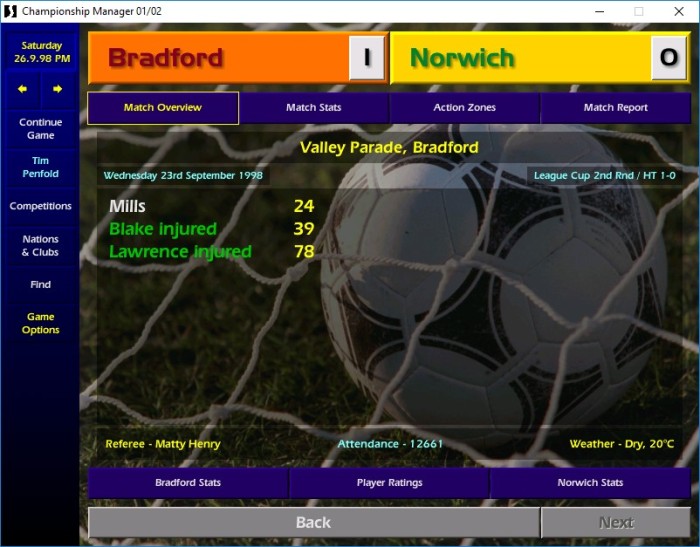 It turns out that these injuries are only short-term – Blake is out for ten days, and Lawrence for two weeks. We’re still fairly short of midfielders when we travel to face Ipswich though. Paul Bolland comes into the starting lineup, while Peter Beagrie plays behind the strikers.

We get off to a flying start when Stuart McCall heads in a Jacobs corner, then McCall feeds Mills who plays in Bolland for the 2nd. Bolland then turns creator, crossing for Beagrie to head in the third. For someone who wasn’t really in my first team plans before injury, that was some performance!

We end September top of the table, and I get another manager of the month award. Edinho picks up player of the month as well. The only bit of bad news is this heartbreaking decision by a City hero. 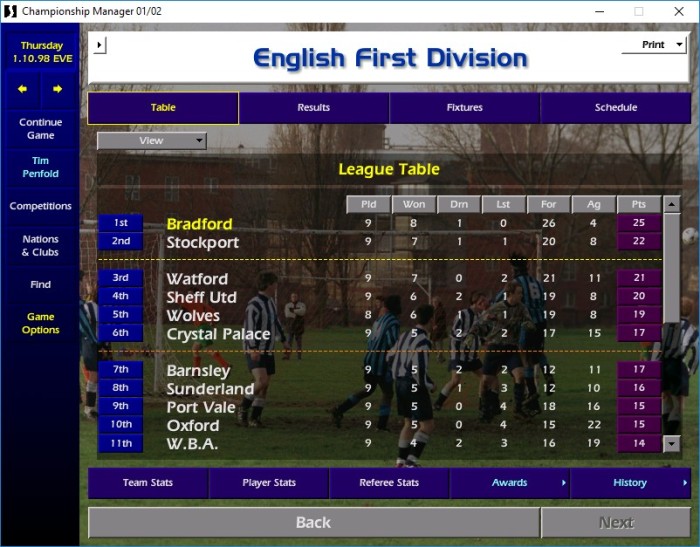 October starts badly in terms of injuries, as Gareth Whalley is out for a month. However, Robbie Blake is back for the next game at home to Bolton, so comes in to the team with Beagrie moving deeper. Isaiah Rankin also gets a start to give Edinho a breather.

This decision proves a good one – it’s Rankin who gives us the lead just before half time, heading in a Bolland cross. Blake doubles this lead in the second half with a header from a Mills cross – hang on, is this the right way round?

Turns out it is. Weird.

We then have good news and bad news in midfield – Jamie Lawrence is back but Paul Bolland is the latest midfielder to get injured and is out for a month. This is really disappointing for a couple of reasons – one is that Bolland has played really well since coming into the team. The other is that it moves Craig Ramage closer to getting a game, and I’m not his biggest fan.

Why, I hear you ask?

Secondly, he clearly thinks he’s amazing and is therefore sulking about not playing.

He remains on the bench for the trip to Crewe, and stays there throughout the game as we cruise to another three points. Edinho, back in for Mills who is being rested, scores early on from a Blake pass, then McCall heads in a Jacobs corner for 2-0. Blake makes it three just after half time, controlling a Jamie Lawrence cross before finishing. Kenny Lunt gets a consolation for Crewe but it doesn’t spark any sort of comeback.

Our next game is a really big one. It’s Wolves at home – and they’re second, with a strikeforce of Steve Bull and Robbie Keane their main threat. I go for as strong a team as I can, with Mills back in for Rankin up front. Whalley and Bolland are still out so it’s Lawrence on the right and Beagrie on the left of the diamond.

Robbie Blake is clearly fired up for this one, and early on he collects a Mills pass and goes on a mazy run. Two defenders are left on the floor before he sticks the ball in the net. He then picks up a second goal – the keeper saved his first attempt but there’s no stopping Blakey today. After half time he completes his hattrick, receiving a pass from Lawrence and hammering it into the top corner. It is the Robbie Blake show.

Wolves push forward desperately, trying to salvage something and go further behind as a result. A Darren Moore headed clearance bypasses everyone and puts Edinho through, and now it’s 4-0. Steve Bull gets a consolation goal late on but this is a rout. A brilliant performance.

We then go down to QPR, and there’s one change – O’Brien is injured so John Dreyer starts.

For once, we don’t get the first goal – it’s the second time we’ve been behind all season, and the first time we went behind we equalised within a minute. This time it doesn’t happen, but we do equalise before half time when Blake sets up Edinho. In the second half Edinho turns provider, crossing for Mills to head in. We cruise to victory, which is then somewhat spoiled when Stuart McCall goes off injured. 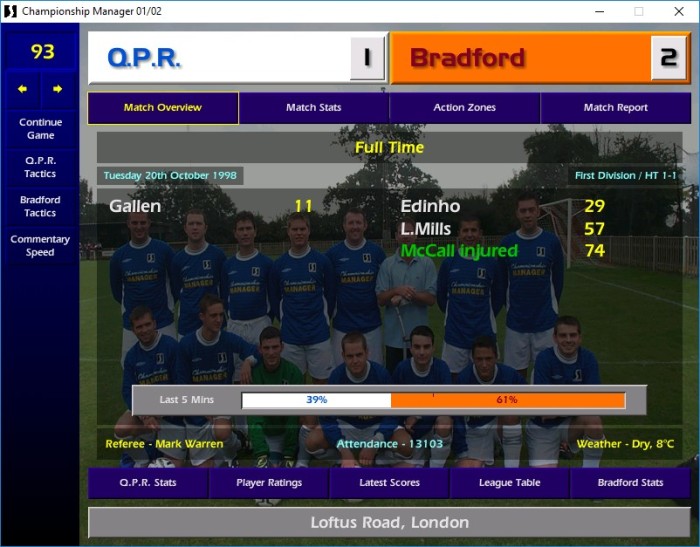 He’s only out for ten days, so we should be OK, right? Well, until Robbie Blake gets injured for a month. This leaves us with a grand total of four fit midfielders – McLaren, Lawrence, Beagrie…and Ramage. I really don’t want to play him, but I seem to have no option now.

Our patched-up midfield is no match for Bristol City – we play badly, and Ramage has a shocker. He’s subbed for Rankin in the second half but we’re already 1-0 down by that point and Akinbiyi doubles the lead late on. Edinho pulls one back with the last kick of the game but it’s too late.

I try to find another midfield option, but Michael Standing won’t join on loan and Djurgardens are refusing my offers for Magnus Pehrsson.

Our next game is a trip to Crewe in the League Cup – I drop Ramage and try Rankin behind a front two of Edinho and Watson. Rotation also means starts for Adam Drury and Graeme Lee.

Unfortunately Rankin goes off injured in the first half, so instead I try Edinho in the hole – anything to not play Ramage. Does it work? Not really, and it’s not helped by Beagrie having a poor game. However, in stoppage time Adam Drury crosses and Jamie Lawrence gets on the end of it. We’re through. 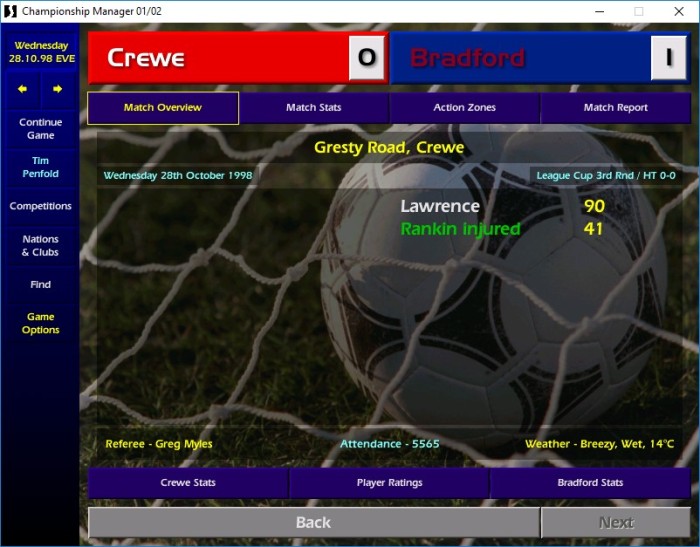 Rankin is out for a month, and I blame Ramage.

Our last game in October is against surprise package Stockport, who are flying. They have two excellent strikers, both of whom I could sign. Ian Moore is promising but the real star is Aaron Wilbraham.

20 for dribbling and flair? Wow, that’s some player. Not sure those stats are particularly accurate though…

I try Edinho in the hole again, with Watson and Mills starting up front, and this time it works. Edinho opens the scoring after 15 minutes from a Lawrence pass, then Gordon Watson scores a complete fluke, blocking an intended clearance with his head and watching it fly in.

Stockport did pull a goal back through Mike Flynn (no, not that one) but we hang on for a win. Considering our makeshift midfield, it’s a big one. 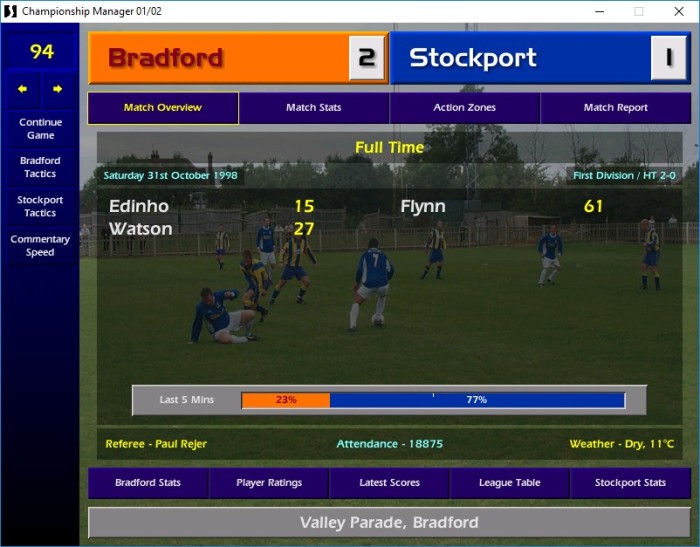 We end October still top of the league, though Wolves and Stockport are keeping pace with us. 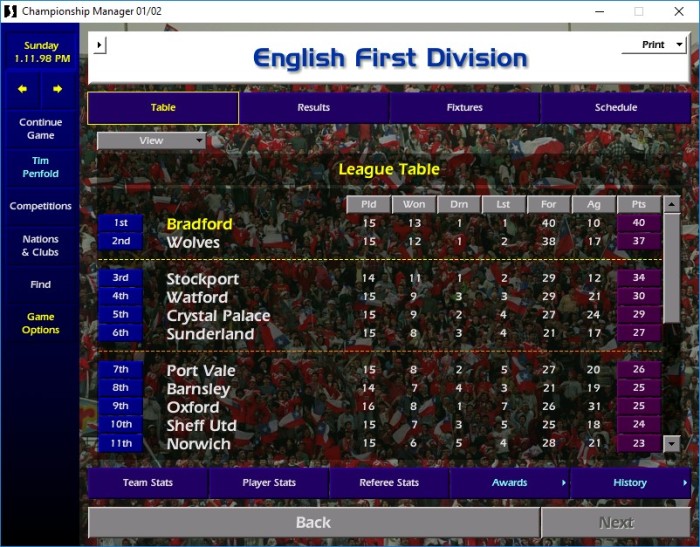 Our playing stars are the front three – Edinho, Mills and Blake are in superb form. McCall’s also having a great season.

However, right back is a bit of a problem position – neither Lee Todd nor Stephen Wright have made the position their own. And then, at the bottom of our average rating table is Craig Ramage.

Robbie Blake deservedly wins player of the month, but I’m furious that Wolves manager Colin Lee beats me to manager of the month – I beat him 4-1! Still, I don’t blame the football league for this. I know who to blame for everything that goes wrong in this team.