Plenty to build on as Bradford City welcome Gillingham 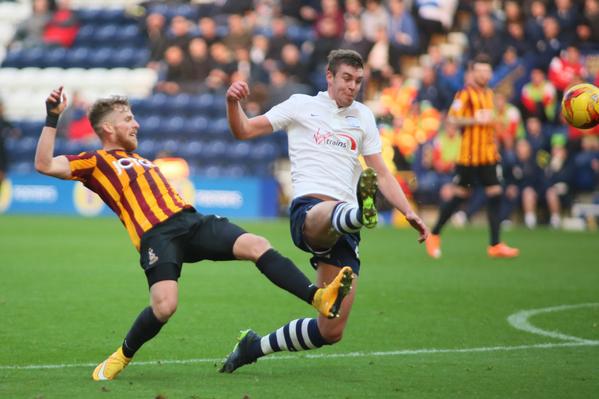 A solid keeper can provide the foundation for a solid team performance, and on Saturday Jordan Pickford produced an outstanding 90 minutes to keep Bradford City in the game, and ultimately grab an unlikely three points.

After an inconsistent start to his City career, Pickford is proving to be an inspired signing (albeit on loan), and it is evident why Sunderland rate him so highly. His performance at Preston in particular highlights just why his parent club see so much potential in him, and it appears that Pickford is getting better and better every game.

Pickford’s shot-stopping and distribution, especially, are his best features, and his command of the area is impressive for a keeper that is only 20 years old.

Another player who seems to be returning back to his best is Stephen Darby. The return back to a more traditional 4-4-2 saw Darby given a lot more cover on the right flank, and as a result he was not as exposed to the opposition overlaps that have hampered him this season. Darby also made some fantastic last-ditch clearances, keeping the Bantams in the game on a couple of occasions. The workrate of Felipe Morais, in front of Darby, helped City’s captain too, with both Morais and Mark Yeates impressing on either wing.

Yeates is in a purple patch at the minute, and is now showing his true potential. The former Watford man is not the quickest winger in the league, but his trickery and technical skill poses a threat to any defence, and his strong right foot means that he can drift inside and create chances from a more central position, or strike at goal, like his fantastic winner last Saturday.

Yeates is a certain starter against Gillingham on Saturday, but Phil Parkinson has a few selection dilemmas. In the centre of midfield, Andy Halliday was a revelation in a new central midfield role, and to drop him would be unfortunate on the Middlesbrough loanee. Having said that, Gary Liddle has returned to full fitness, and Billy Knott is another option in that position.

Another choice for Parkinson to make comes with the return of James Hanson. City’s longest-serving player made his comeback from injury in the closing stages of last Saturday’s win, but Billy Clarke and Jon Stead have been impressive in his absence, and neither deserve to be dropped. Clarke, in particular, changed the game when he was introduced in the FA Cup tie at Halifax, and is beginning to show what he can offer to the team.

As for City’s opponents, Gillingham secured a last-gasp winner at home to Leyton Orient last weekend, with Cody McDonald scoring after 98 minutes to give Gillingham the three points. Managed by former City boss Peter Taylor, the Gills also have ex-City loanee John Egan, who played well for City, until he unfortunately broke his leg. Egan has been a key player for Gillingham this season, starting every league game.

Gillingham endured a very poor start to the season, but their win on Saturday saw them climb out of the relegation places. They will be without QPR loanee Michael Doughty, who is suspended, but Taylor will more than likely pick an unchanged side. They tend to line up in a 4-4-2 formation, with Stuart Nelson in net, and a back four of Adam Chicksen, Egan, Leon Legge and Gavin Hoyte. In midfield, Jake Hessenthaler and Bradley Dack will play in the centre, with skipper Doug Loft and the skilful Jermaine McGlashan on either wing. Up front, Taylor will play Cody McDonald and Ben Dickinson, although the experienced Danny Kedwell could feature.

McGlashan has played and impressed against City before with Aldershot and Cheltenham, and he possesses great pace and trickery. James Meredith will have to be on top of his game to nullify the threat he poses.

Despite their league position, Gillingham will provide a stern test for the Bantams – especially with the issues playing at home needing to be rectified. Nevertheless, a Bradford City victory will be their third consecutive win – a feat last achieved in October 2013.

Like Loading...
‹ Nahki Wells will one day be loved again at Bradford City
Careless Bradford City trip themselves up to lose two valuable points ›