Home › Opinion › From the One you Left Behind

From the One you Left Behind 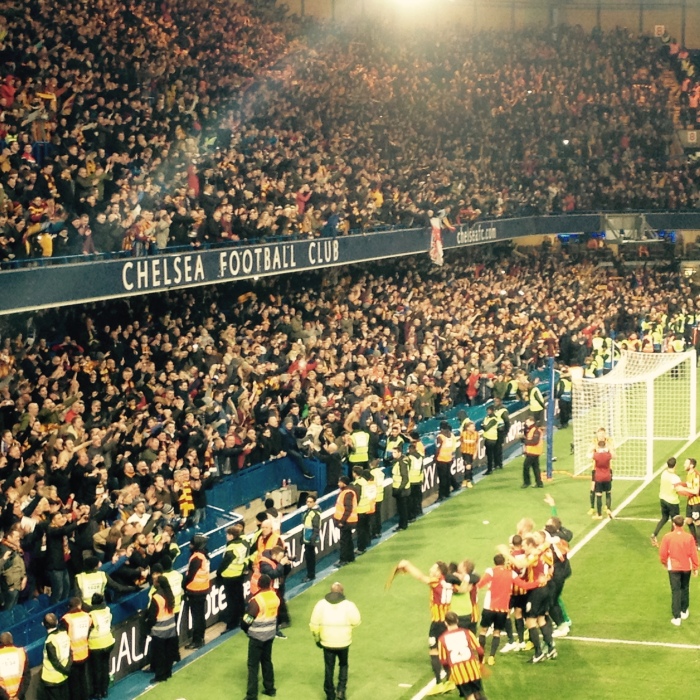 I first watched city as a junior bantam back in 1987. My first game was in the little Midland Road terrace, or as we knew it: The Chicken Hut.

I’ve watched the likes of Stuart McCall become legendary and the lofty days of the Geoffrey Richmond era. Add that to post Premier League era and our umpteen awful sides and embarrassing home defeats, I’ve seen it all.

The FA Cup game at Chelsea is the first time that I’ve missed such an important game since then. Gutted.

Realising last week, after my mate called me from a freezing Valley Parade, that we didn’t have tickets was a bitter pill to swallow. Hours in the cold for nothing. I won’t bore you with my opinions on the club’s ticketing arrangements, but the fact was this: I wasn’t going.

Waking up Saturday morning to endless tweets of people setting off for London made it hit home. I was pleased for long time City fans that I knew were going, but it couldn’t hide my envy. With City you get that feeling that today was to be something special. It reminded of Hull, Wolves and Liverpool. The magic of the FA Cup was alive and well.

The Tweets and the Facebook updates came in thick and fast which helped build the excitement. From feeling bitter, jealous and lost, I’m now in on it. I saw the videos of the fans singing and the team coach arriving. I saw the build up on Football Focus. I listened to the radio and the player interviews. Something was happening, you could feel it. The build up was growing and growing, it consumed me.

The first pictures of fans in the ground were now on my timeline. Now the team sheets. This is getting exciting! We’re under way. All I can hear is the lucky 6,000 fans in full voice. I joined in, but doubt you could here me from Silsden! Moments like that make you proud and help you realise that people love your club as much as you do.

At two-nil the fans never gave up and neither did the team. More videos, more pictures, more texts, more messages and breathless commentary on the radio made it epic, exciting and enthralling. This is why we love football. It almost felt as if I was there!

To come back from two-down to the best team in England and win 4 – 2 at their ground is one of the greatest cup shocks of all time. No will ever forget it, nor should they.

The TV, the internet, the radio; the whole footballing world went crazy. Bradford City was everywhere. We’re trending big time! What a feeling this was! That moment of dread at two-nil down, and when the referee somehow added seven minutes of injury time to this feeling of pure elation. It doesn’t get better than this.

This is why we do it! In my mind, my pacing around the living room and singing as loud as I could had helped us over the line. We’d done it!

I was inundated with calls, texts and messages. Our victory was everywhere. Every Bradfordian felt 2ft taller and felt like a millionaire! After watching and re-watching the highlights a million times I was now certain it was true. It really did happen, I wasn’t dreaming.

I guess me not witnessing this unbelievable moment was meant to be. I’ve seen my fair share of special matches following City. If me missing out makes someone who did go in to a loyal fan then it’s worth it. The more of us the better.

We’ve won the war at Stamford Bridge, the battle to keep Phil Parkinson and his team has begun.

Like Loading...
‹ The Chelsea Verdict part two: Re-writing every single chapter of the history book
The Villain viewpoint ›