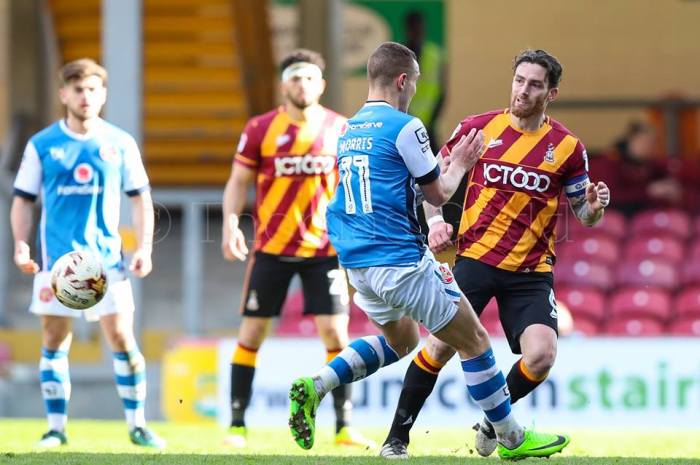 Frighteningly, there are just five games of the season remaining, and there is much to resolve as the key storylines race to their conclusions. Will Bradford City make the top six and earn a Wembley encore? Will Cambridge United remain a northern football club? Will James Meredith finally receive the recognition he deserves at the Player of the Year Awards? And will Stuart McCall get his happy ending?

Everyone is still learning how to measure success 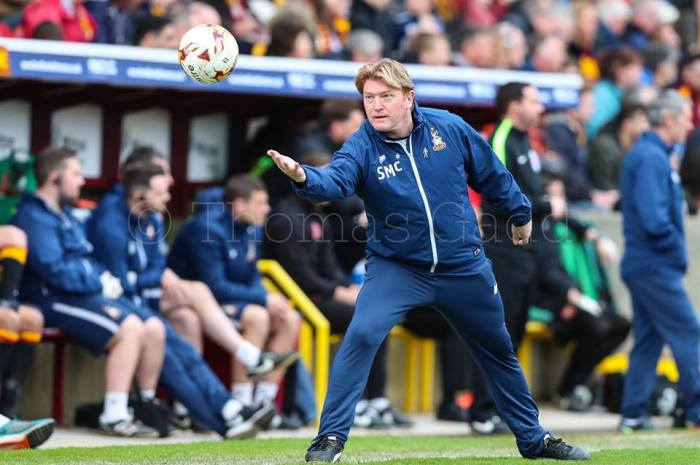 “Given their starting point” is the closest thing this season has had to a chorus, and whether it remains a valid soundtrack at this point is questionable. City’s starting point is set in stone but is now a blot in the distance, McCall and co. having skipped over churning waters with what, upon reflection, feels like comedic ease.

The reality was probably scores of sleepless nights and many exhausting, caffeine-fuelled meetings in dwindling daylight, but such is City’s rapid and seamless progress that it feels more fitting to imagine Edin Rahic chuckling at the pre-season crisis with all the casual contempt of a man summoned back early from his holiday. “You tell me we have a big problem and this is all?! The manager’s left?!”

Rahic spoke again last week of a plan that seems more appealing the clearer it becomes. His transparency is commendable and refreshing in view of the failings at Charlton and Coventry that have ignited criticism of the Football League’s FPP test. The way the blocks have slot into place is remarkable considering Rahic and Rupp have owned the club for about ten months.

No one on the outside knew how this would go. The words ‘transition season’ were mooted but discarded after all of a month. The noises from inside the camp have been unequivocal. Filipe Morais said, “If we don’t get promotion, personally, I would see it as a failure. With the squad we’ve got, we should be in the top two, top six, minimum.” Nicky Law said of the top six, “That was the aim at the start of the season and we have the confidence in each other that we can do that.” In November, James Meredith said the squad seek to average two points a game, “because we know that will lead to automatic promotion – usually.”

A bustling start and summer window of renewed quality justified rising expectations – and City have never left the top six since entering it. Falling out of the play offs at this stage would carry the tinge of failure. Missing out on promotion would be disappointing but obviously forgivable, and the bigger picture would underline that point. In the more immediate term, public opinion swings constantly like a pendulum, the belief that waned after last Sunday’s late collapse restored by the following Saturday.

Moreover, a sizeable chunk of the pre-season discourse seemed almost preoccupied with suppressing – at least diminishing – the realm of the emotive. Even almost a decade on, it was easy, mentally, to lumber McCall with the freight of whatever came before, and memories of the burdensome emotional load that persistently shaded his first spell became the source of much hand-wringing.

Motherwell’s Champions League dalliances suggested McCall had since allied his trademark good nature with a hardier steel, but the questions still felt valid. Could McCall, the devoted servant, succeed here, with the history, good and bad, that will always provide such a constant overhang? Would his squad, then just a glint in the eye, be steelier than the 2008 charges that, for all their potential, ultimately succumbed to collapse?

In reality, McCall stands far removed from that era – as much was in evidence from the outset – but his most endearing qualities have remained, perhaps even enhanced. There is the restorative touch that has reinvigorated the hitherto ostracised Mark Marshall, for one, and the panache with which he has rewired Parkinson’s Clockwork Oranges into a team of almost liquid fluidity.

All the while, he’s done so with humility, and a conduct far removed from the point-scoring that has peppered so many conversations about Phil Parkinson. There is an earthiness to the squad’s mentality that often feels at odds with their breathless vitality.

McCall insisted on day one this was no lovesick return. “It’s not an emotional decision – it’s a professional one,” he said, in his maiden press conference. “Everyone knows my affection for this club, but it’s about a desire and a determination to be successful, and build on what I’ve done in the last four or five years.”

McCall has carried himself like a man true to those words but the fanbase has been a little more ambivalent in its attachment. Jason McKeown and Bantams Banter admitted on Twitter that every blow is more keenly felt with McCall at the helm, and that sentiment rings true for most. Yet there are others, so wary of ruling a line under 2008, who attempt to take a more objective slant.

In fairness, the truth probably lies somewhere between. Even without the romantic backstory, McCall’s achievements this season have been commendable, almost startlingly so. His 30-year affiliation with City has no bearing on the club’s current league standing, but the fact of the matter is that the club has moved mountains in less than a calendar year. The romance here is unavoidable, and – let’s be honest – that’s fun. If McCall finishes the job at Wembley in May, the bottom line is that this is exactly how you’d write it. Few people deserve a happy ending more than this figure of steadfast loyalty.

Yet for all his realism, McCall couldn’t hide a smirk at his July unveiling as he sheepishly smiled, “People said never go back as a player – but I did come back and had a little bit of success.” History is going to repeat itself, one way or another, now – that much is inevitable. But after all their toil, City will be hoping for a party like ’98/99, not ‘08/09.

Saturday night, and suddenly City’s defensive shortcomings – or lack thereof – don’t feel like part of the debate. City were a little less gung-ho, but, arguably consequently, looked untroubled defensively. It felt a world away from Sunday, when a defence given to occasionally tripping over their own shoelaces did so one more.

Jason McKeown suggested on Friday that City’s defensive frailties are largely a by-product of the squad’s offensive tilt. His assertion that the Scunthorpe game marked the culmination of this, and was a calculated gamble in view of other results, likely holds some truth. If this squad feels more vulnerable at the back compared to a Parkinson side that appeared little less yielding, that’s a reasonable price to pay for last Sunday’s bruising intensity.

Yet rightly or wrongly, blaming that sense of adventure feels – in City’s case, at least – a little misplaced. It sounds reductive, but the reason why tempers have flared so intensely after defeats and draws this season is partly because results have felt so preventable. By and large, City haven’t been undone by committing in numbers offensively, or attacking with too much vigour. Instead, a litany of individual errors and condemning flashpoints have proved decisive – or nearly so – time and again.

If you had the time and/or inclination to re-watch all 39 league goals scored against City (contrary to popular belief, I don’t), it would probably highlight just how infrequently McCall’s side have genuinely been carved or scythed open with real clinicism. What’s more, City have the third best defensive record in the division, behind only Fleetwood and, of course, Bolton.

Although that may feel more frustrating in the immediate term, the upshot of that is that at least this is not wholesale system failure. The narratological dilemma is when these flashpoints become so commonplace that they feel inherent. Alex Scott asserted in the aftermath of the Scunthorpe game that City “have two key characteristics in their DNA: they cannot convert dominance into goals, and they cannot defend set pieces.” There is something ironic about the latter for a fanbase once accustomed to watching Andrew Davies deflect bothersome crosses with utter nonchalance, but it’s an issue that looks rectifiable.

It’s worth reasserting that their fluidity remains the most striking facet of their identity, City spinning and shuffling into more guises than Optimus Prime. A touch more caution might temper the final five games as City seek to cement their play off spot, but the challenge for McCall, now, is to make sure his squad can ally common sense to their obvious intelligence and strategic malleability.

Attain Wembley success and the side’s paralysis from dead balls will become a mere footnote to season of cohesive play. Fall short, and, in a harsher light, it might feel like, for all their running, City have hampered themselves by repeatedly failing to get the basics right.

What else is there to say about Charlie Wyke? In these fledging days of his Bradford City career, Wyke has pretty much come as advertised: an opportunistic forward at the peak of his powers, likely to take this team to the next level, and looking, already, like a big-game player. His final-minute winner against Swindon, dragging the ball onto his left foot before tapping home from close range, was a case in point, Wyke adding nous to the instinct in a finish of almost artful execution.

His physicality is obvious but more striking is the natural menace, bite and bravery that have produced goal after goal, and painted a picture of a striker playing without inhibition. Wyke cannot rival the pace of Nahki Wells but he seems blessed with a cunning intuitiveness that, before, often eluded City in front of goal.

Perhaps surprisingly, Wyke was the only City player to make FourFourTwo’s Top 50 Football League Players list, at #35 (the omission of Cullen and Meredith rankles). “Former Middlesbrough trainee Wyke is starting to look like the finished article,” they wrote, “a striker who can operate to good effect in several systems. Thirteen goals in 16 outings for Carlisle convinced Bradford to part with a hefty chunk of their budget to recruit him, and four goals in his first three matches at Valley Parade would suggests that it’s been money well spent.”

It’s hard to argue with their logic. Wyke might still be waiting on his first away goal for City but, on the whole, is prospering as the main striker in a front three. Alex Jones has been key, and his drive and vision have filled a void left by injury to the marauding Nicky Law.

Early comparisons have likened the pair to Mills and Blake (For the record, I was 2 ½ when City were in the Premier League. I had bigger, likely Toy Story based, fish to fry. I’m absolutely not the right person to ask about this.). The pair have a way to go to match McCall’s former teammates, but have proven City will not merely tread water in the absence of Clarke and Law.

There might be criticisms that Wyke is isolated at times, or goes missing, but overall Wyke is pretty much what City needed. They already had a side full of creators – what they needed was a man who could be prolific. In Wyke, they have a player who can team fearlessness with lethal finishing – and City have finally found what they were looking for.