The Bantams Banter lads – big favourites of this parish – have got in on the Bradford City Cup Final song act, with a superb adaptation of Ant and Dec’s 90s hit “Let’s get ready to rumble”.

Dom Newton-Collinge told Width of a Post the story behind their brilliant song.

“Our cup final song came about as a bit of a joke initially. On the way home from the Villa game I said to Tom ‘We should do a cup final song’; we laughed it off. Then we saw a couple of folks bringing out songs, and we liked them a lot, but thought, ‘we have to have a go don’t we?’.

“We wanted to do something that not only fit in with the humour of the podcasts but something that was more traditional, a cheesy football song. We set to work, picked out a song from our youth sung by a duo, re-wrote the lyrics and set about finding somewhere to record it.

“The Woolpack Studios in Otley replied to our email almost straight away and the next day we found ourselves recording. Within a couple of hours we’d recorded, mixed and burnt it to CD.

“I knew I was a terrible singer, but wow, hearing myself back was a shocker! I’m pretty sure the way I sing was punishable by death in the 1400s. Anyway, a pal of ours, Tom Lever, has worked on some professional film sets in the past so we asked if he’d film us. We let him know we wanted to get a song out just as the hype for Wembley was kicking off, he’s a great fella and was really enthusiastic about working with us.

“We met in Bradford, messed about a bit, using miming skills that would make Beyonce blush. We put up with folks throwing lighters at us and staring at us like we were escaped Zoo life, but it was a lot of fun. Believe it or not, we filmed every second of the video on an iPhone – int technology marvellous?

“Mr Lever had the video edited within a day, which is nothing short of remarkable because we must have filmed 4 hours of stuff. It’s cringe worthy to watch, but we’re pretty pleased with the outcome. It’s what we wanted, nothing to be taken seriously. Our listeners seem to love it. The Daily Mail has even written about us and our song. It’s not the most complimentary article, but I think they get that it’s just a joke and to be honest, it’s better than the first article they wrote about us.”

And what about producing a Bantams Banter podcast at Wembley? “The Football League have provisionally accepted us into the press box,” revealed Dom.  “The fee (£1,345) is now looking do-able too after some VERY generous donations from our listeners. As of Wednesday evening, we’re only about £200 off the final target.

“We’ve also had to apply for an ID card from a company called Football DataCo. They handle all media accreditation for the Football League. They sent us an email asking for two passport sized photos, so I think we’re sorted there.

“Who’d have thought it? Last year you interviewed us about the prospect of Bantams Banter coming to an end due to funding issues, now we’re mere days away from realising a dream and broadcasting from Wembley. And it’s all thanks to our listeners; the very people we work hard to entertain have repaid us in the best way possible.”

1. There’s no one as Wembley as Bradford City by Corrigan Brothers

2. The Spirit of Bradford City by Simon Crabtree

3. Cap One Story by Mark Heslop

Have you produced a Wembley song? Email widthofapost@gmail.com 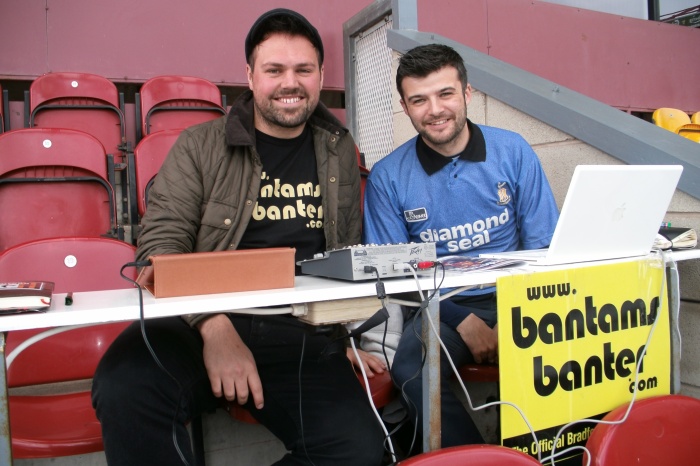 Like Loading...
‹ This Sporting Life
A chance to build on the momentum for the promotion push at AFC Wimbledon ›